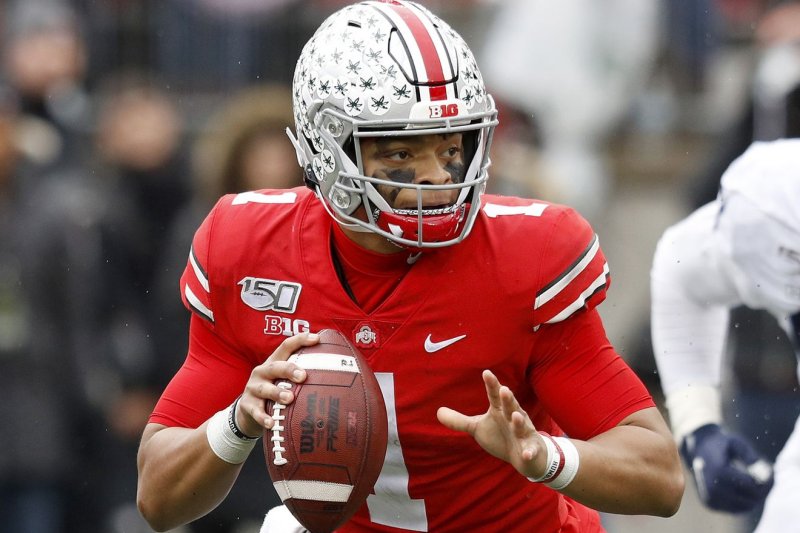 Ohio State Buckeyes quarterback Justin Fields might not play until the spring -- if at all -- after the Big Ten postponed fall sports Tuesday due to the coronavirus pandemic. File Photo by Aaron Josefczyk/UPI | License Photo

Aug. 11 (UPI) -- The Big Ten and Pac-12 conferences on Tuesday postponed fall sports -- including football -- for the 2020 season due to the coronavirus pandemic.

The Big Ten became the first among the Power-Five conferences to announce a postponement of fall sports due to COVID-19.

Later Tuesday, the Pac-12 followed suit and voted to cancel its fall sports season through the end of the year, a decision that will also halt basketball.

The ACC, SEC and Big 12 are expected to announce fall plans later this week.

Big Ten and Pac-12 officials said they will evaluate other options for the sports, which include potential spring seasons, if conditions related to the coronavirus improve. The conferences are evaluating a timeline for winter and spring sports seasons.

"The mental and physical health and welfare of our student-athletes has been at the center of every decision we have made regarding the ability to proceed forward," Big Ten commissioner Kevin Warren said in a news release.

"As time progressed and after hours of discussion with our Big Ten Task Force for Emerging Infectious Diseases and the Big Ten Sports Medicine Committee, it became abundantly clear that there was too much uncertainty regarding potential medical risks to allow our student-athletes to compete this fall."

Pac-12 commissioner Larry Scott said Tuesday that many factors went into his conference's decision, including the high number of cases in many locations around Pac-12 schools.

"The health, safety and well-being of our student-athletes and all those connected to Pac-12 sports has been our number one priority since the start of this current crisis," Pac-12 commissioner Larry Scott said in a statement.

"Our student-athletes, fans, staff and all those who love college sports would like to have seen the season played this calendar year as originally planned, and we know how disappointing this is."

The Big Ten said it engaged in "extensive research" and worked with federal, state and local government agencies, and professional and international sports organizations to better understand the pandemic before it reached the decision to postpone fall sports.

"We know how significant the student-athlete experience can be in shaping the future of the talented young women and men who compete in the Big Ten Conference," Warren said. "Although that knowledge made this a painstaking decision, it did not make it difficult.

"While I know our decision today will be disappointing in many ways for our thousands of student-athletes and their families, I am heartened and inspired by their resilience, their insightful and discerning thoughts, and their participation through our conversations to this point.

"Everyone associated with the Big Ten Conference and its member institutions is committed to getting everyone back to competition as soon as it is safe to do so."

The University of Connecticut on Wednesday became the first Football Bowl Subdivision school to cancel its 2020 football season due to the coronavirus. Some conferences have decided to play conference-only football schedules this fall while others have postponed fall sports until the spring.

The Mid-American Conference announced Saturday that it intends to play its fall sports schedule in the spring. On Monday, the Mountain West became the second FBS conference to postpone football and other fall sports due to the pandemic.

The Big 12, ACC, SEC and Pac-12 joined the Big Ten in previously announced plans to play mostly in-conference opponents to limit travel due to the pandemic.

Some of college football's best players -- including Clemson's Trevor Lawrence -- have spoken out on social media about their desire to play football this fall as the outlook continues to crumble.

"People are at just as much, if not more risk, if we don't play," Lawrence tweeted Sunday. "Players will all be sent home to their own communities where social distancing is highly unlikely and medical care and expenses will be placed on the families if they were to contract COVID-19."

The Clemson quarterback and Heisman Trophy favorite joined Ohio State quarterback Justin Fields, Alabama running back Najee Harris and other stars with a unified message of "we want to play" Monday morning on social media.

The top players' Power-Five schools posted the same graphic, which called for "universal mandated health and safety procedures and protocols" to protect college athletes against COVID-19 among all conferences in the NCAA.

President Donald Trump retweeted the graphic and supported the players' request and desire to play.

"The student-athletes have been working too hard for their season to be canceled," Trump said. 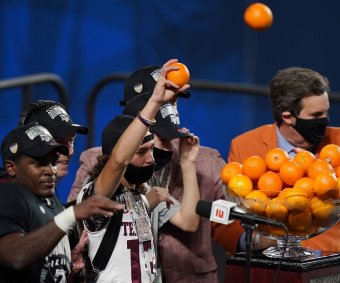