March 22 (UPI) -- Wofford's Fletcher Magee set the Division I record for career 3-pointers during the Terriers' win against Seton Hall in the first round of the NCAA tournament.

The senior sharpshooter sank the record trey 30 seconds into the second half of the 84-68 triumph Thursday at VyStar Veterans Memorial Arena in Jacksonville, Fla. Magee finished the game with 24 points, while making 7-of-12 shots from 3-point land.

"When I hit it, I noticed the crowd was a little louder than just a normal three in the second half," Magee told reporters. "I feel like I didn't get too caught up in it. It was a close game and I was just focused on doing whatever I could to help us continue to stretch our lead and win down the stretch."

Magee's 158 3-pointers in 2019 are four behind former Davidson star Stephen Curry for the most in a single season.

The Wofford win is the first tournament triumph in program history. Wofford has a date with Kentucky in the second round at 2:40 p.m. Saturday in Jacksonville.

"It was really neat," Terriers coach Mike Young said. "What you don't see, what you don't have a pulse of is how uncommon he is and how hard he has worked time and time again in that gym. I go over often to watch film and I can't tell you how many times I go in that gorgeous building of ours and there is a ball bouncing and I know it's him. At 10 at night. He's not messing around. He's going at it and getting better."

"I'm proud of him and i can't begin to tell you what a pleasure he has been to coach." 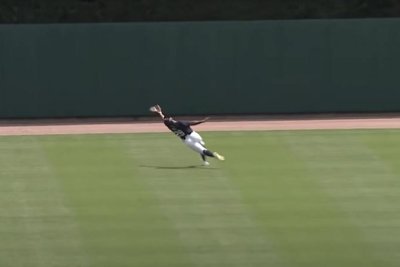