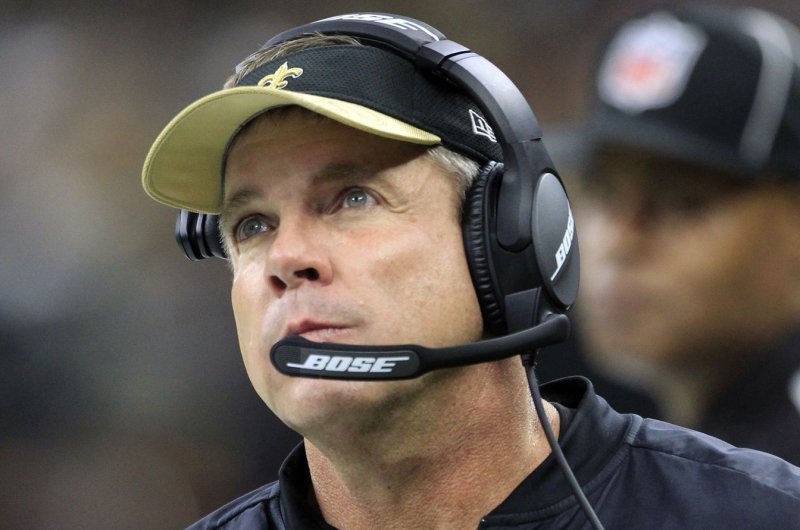 New Orleans Saints head coach Sean Payton looks up at the scoreboard late in the game with the Atlanta Falcons at the Mercedes-Benz Superdome in New Orleans September 26, 2016. Photo by AJ Sisco/UPI | License Photo

New Orleans Saints running back Mark Ingram (22) picks up 17 yards against the Atlanta Falcons defense in the second quarter at the Mercedes-Benz Superdome in New Orleans September 26, 2016. Defending on the play is Atlanta Falcons outside linebacker Deion Jones (45) Photo by AJ Sisco/UPI | License Photo

SERIES HISTORY: 12th regular-season meeting. Chargers lead series, 7-4. The Saints visit San Diego's Qualcomm Stadium for the first time since 2004 as their last two meetings with the Chargers were played in London's Wembley Stadium in 2008 and the Mercedes-Benz Superdome in 2012. The Saints have won the past two meetings -- 37-32 in London and 31-24 in New Orleans -- and have taken three of the last four meetings after the Chargers claimed six of the first seven meetings in the series.

KEYS TO THE GAME: Saints QB Drew Brees knows he doesn't have any room to let his foot off the gas with New Orleans' defense decimated by injuries at all three levels. The Saints' running backs have 51 carries compared to Brees' 140 pass attempts, although to be fair New Orleans has often being trying to play catch-up. And the heat will continue to be on San Diego's defense, which enters 30th in the NFL against the pass. The Saints protect Brees well, but he continues to be prone to getting passes deflected at the line of scrimmage and turnovers could play a major factor in what shapes up as a shootout.

Chargers QB Philip Rivers, whose career has long been intertwined with Brees' since he warmed the bench for two years in San Diego behind Brees has yet to throw an interception this season but has been sacked six times. He's already minus WR Keenan Allen and RB Danny Woodhead, with TE Antonio Gates also likely to miss his third consecutive game. The Saints' defense has been hit equally as hard by injuries and Rivers should be able to exploit youth at several spots on the league's 31st-ranked defense. New Orleans allowed 217 rushing yards last week, with Chargers RB Melvin Gordon looking to improve on his average of 3.6 yards per carry.

--Chargers secondary vs. Saints receiving corps: Jason Verrett, San Diego's top cover man, acknowledged struggling in last week's loss to Indianapolis. Brandon Flowers, who also was beat several times, has yet to be cleared from a concussion. San Diego's 30th-ranked pass defense will be under attack from the Saints' deep receiving corps, led by speedy Brandin Cooks and emerging rookie Michael Thomas, who has a team-leading 17 catches.

--Chargers WR Travis Benjamin vs. Saints CB Ken Crawley: The Saints' rookie who has been pressed into a starting job was rarely tested while covering Julio Jones on Monday night, but that's primarily because Atlanta had so much success running the ball and spreading the passing game to a wealth of other receivers. Crawley will likely play a key role in keeping tabs on the speedy Benjamin.

PLAYER SPOTLIGHT: Chargers LB Jatavis Brown - The rookie steps into the lineup for the injured Manti Te'o, or at least that's the plan. Brown was limited in practice midweek by a hamstring injury, although he's expected to play.

PREDICTION: Who blinks first? New Orleans is third in the league in offense and should be able to move the ball up and down the field against a struggling secondary. But can New Orleans stop Philip Rivers? Even minus three of his top playmakers, Rivers has avoided interceptions and should be able to match Brees strike for strike against the Saints' injury-ravaged defense. The Saints are more desperate for a victory ... if only ever so slightly.