By Todd Karpovich, The Sports Xchange

Nonetheless, the Rays have made life tough for several contenders over the past few weeks.

Longoria tied his career-high with his 33rd home run and had five RBIs to lead Tampa Bay past the Baltimore Orioles 7-6 in the series opener Thursday night.

The Orioles fell two games behind the Boston Red Sox for first place in the American League East. The Rays won their third straight game.

"It's fun that we are playing competitive baseball," Longoria said. "It's one thing to go out in a great environment against a team that is a playoff contender, but to be in the game and winning games is the best thing about it."

Steven Souza Jr. went 3-for-4 with an RBI and Logan Forsythe also had a pair of hits with an RBI for Tampa Bay, which won for the first time in seven games at Camden Yards this season.

The Orioles trailed 7-4 in the eighth when Chris Davis led off with a walk and Matt Wieters doubled to end Dana Eveland's evening. Danny Farquhar entered and got J.J. Hardy to ground out to first, but Davis scored to cut the margin to 7-5. Another grounder by Michael Bourn pulled Baltimore to within a run.

That was as close as the Orioles would get. Alex Colome entered in the ninth and allowed one-out singles to Jonathan Schoop and Manny Machado. However, Colome struck out Mark Trumbo and Davis to pick up his 33rd save.

"Great ballgame," Rays manager Kevin Cash said, "It went right down to the wire. Back and forth obviously early on. (Longoria), obviously, huge night tonight. Five RBIs. To the Orioles' credit, they bounced right back. Loved the way the guys continue to go out there."

Orioles right-hander Yovani Gallardo (5-8) ran into trouble and never recovered. After walking two batters to open the game, he allowed a three-run homer to Longoria to straightaway center. Gallardo has given up 21 runs, 27 hits including seven homers and 17 walks in his 21 first innings this season.

Baltimore responded in the bottom half and took a 4-3 lead on a two-out, two-run single by Wieters followed by a double by Hardy that scored two more runs off rookie left-hander Blake Snell.

Gallardo, however, continued to struggle and the Rays tied the game in the second on a single by Forsythe. Tampa Bay retook the lead 5-4 on a two-out double by Souza in the third that was just beyond the grasp of a diving center fielder Adam Jones.

A one-out double by Forsythe in the fourth ended Gallardo's night. Tommy Hunter entered for Baltimore and allowed a two-run single to Longoria that increased the lead to 7-4.

Gallardo was charged with six runs on seven hits, but did manage seven strikeouts.

"Just falling behind guys," Gallardo said. "That's the No. 1 thing, can't start the game walking the first two guys and then making the mistake there to the No. 3 hole hitter. It's never a good start. Every time you make a mistake to a hitter like that, he's going to make you pay."

The Orioles threatened in the fifth when Jones walked and Schoop hit a ground-rule double. Brad Boxberger (4-1) replaced Snell with one out and got out of the jam on pop-up by Trumbo and a soft grounder by Davis.

"It's a tough loss because we fought back and had a chance there at the end," Wieters said. "We left a lot of opportunities out there today, but to have a chance there in the ninth inning, it's all you can ask for. Didn't come through today, we'll look for tomorrow."

NOTES: Orioles RHP Mike Wright was recalled from Triple-A Norfolk and will pitch out of the bullpen. Baltimore also selected the contract of INF Paul Janish from the Tides. ... Rays 1B/DH Logan Morrison (wrist) likely will not play again this season and he is still trying to determine if he needs surgery. Cash said Thursday that Morrison was getting a second opinion on the injury ... Baltimore RHP Darren O'Day will throw a simulated game Friday. If there are no setbacks, O'Day could be activated Sunday or Monday, according to Showalter. ... Orioles LHP Wade Miley (8-13, 5.80 ERA) will likely start the series finale Sunday against the Rays, Showalter said. While Miley has struggled since being acquired from Seattle on July 31, he is 4-2 with a 2.81 ERA in eight career starts against Tampa Bay.

Sports News // 7 hours ago
For Novak Djokovic, French Open, U.S. Open in doubt due to being unvaccinated
Jan. 18 (UPI) -- Tennis great Novak Djokovic's quest for a record 21st Grand Slam title could be delayed further because of government officials' concerns that he has not been vaccinated for COVID-19,

Sports News // 12 hours ago
Australian Open tennis: Tsitsipas, Sabalenka advance, top Americans ousted
Jan. 18 (UPI) -- Stefanos Tsitsipas and Aryna Sabalenka were among the top-seeded players to win Tuesday at the Australian Open. Sofia Kenin and Coco Gauff, the top Americans in the tournament, each were eliminated in the first round.

NFL // 14 hours ago
Matthew Stafford, Rams crush Cardinals, advance to divisional round
Jan. 18 (UPI) -- Veteran quarterback Matthew Stafford earned his first career playoff win, throwing for two scores and running for another in a dominant Los Angeles Rams victory over the Arizona Cardinals in the 2022 NFL wild-card round. 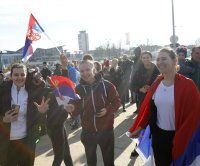