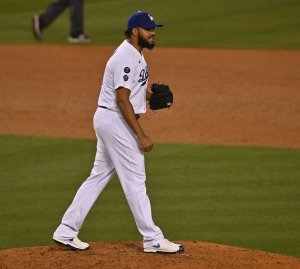 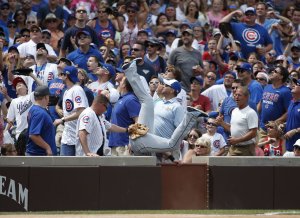 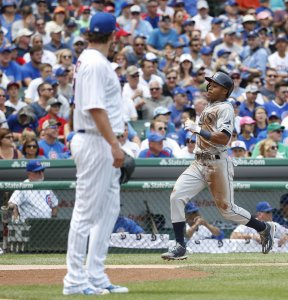 MLB // 2 weeks ago
Max Muncy caps Dodgers-Giants slugfest with 420-foot blast
Los Angeles Dodgers star Max Muncy stared into the sky and flicked his bat aside as he watched his go-ahead, 420-foot homer against the San Francisco Giants sail over the right field fence at Dodger Stadium.

MLB // 2 months ago
Padres SS Fernando Tatis Jr. goes down with hurt shoulder chasing a pitch
San Diego Padres shortstop Fernando Tatis Jr. sustained a partial dislocation of his left shoulder when he took a powerful swing during a game with the San Francisco Giants on Monday.

MLB // 1 year ago
Giants' Kevin Pillar beats Cardinals with 440-foot bomb
Kevin Pillar pelted an 0-1 fastball over the left center field fence at Busch Stadium to lead the San Francisco Giants to a dramatic victory against the St. Louis Cardinals.

MLB // 2 years ago
Orioles ballgirl fields laser during loss to Giants
A ballgirl showed impressive poise in fielding a foul ball laser during the San Francisco Giants' win against the Baltimore Orioles at Oriole Park at Camden Yards. 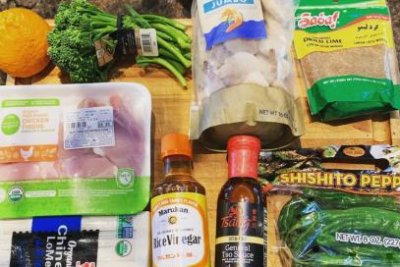 MLB // 2 years ago
Dodgers' postseason hopes on line in series vs. Giants.
SAN FRANCISCO -- The San Francisco Giants get an opportunity to play spoiler against the team they'd most enjoy spoiling -- the Los Angeles Dodgers -- when the longtime rivals close out the regular season with a three-game series that begins Friday night.

He made his major league debut for the Rays in 2008, and was named to the American League team for the 2008 MLB All Star Game. Longoria was also named the 2008 American League Rookie of the Year on November 10.

Born in Downey, California, Longoria graduated from St. John Bosco High School. He was a two-year letterman in baseball and as a senior was a first team All-Serra League selection. Longoria did not receive any scholarship offers to play college baseball. USC was the only program to consider him, but eventually backed out of recruiting him. At 6-foot-1 and 170 pounds, many baseball recruiters felt Longoria was too slim by Division I baseball standards. As a result, he attended Rio Hondo Community College during his freshman season before LBSU offered him a scholarship.

FULL ARTICLE AT WIKIPEDIA.ORG
This article is licensed under the GNU Free Documentation License.
It uses material from the Wikipedia article "Evan Longoria."
Back to Article
/