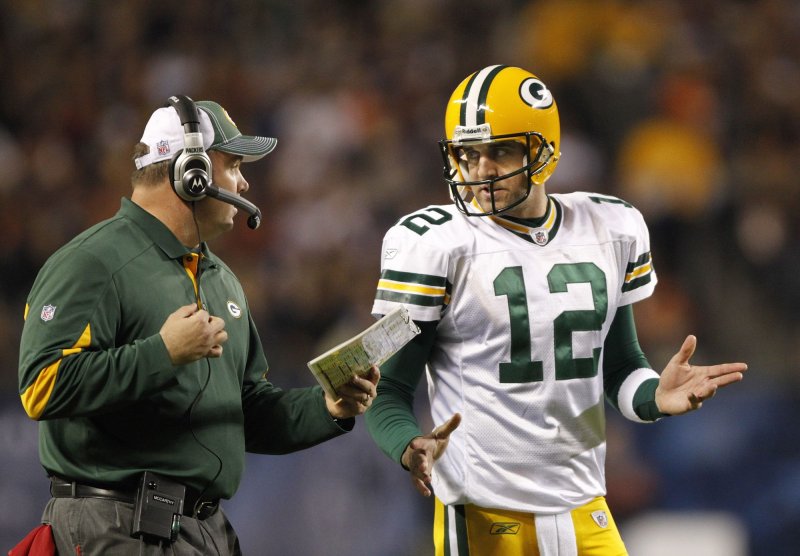 GREEN BAY, Wis., Oct. 11 (UPI) -- Green Bay quarterback Aaron Rodgers has been diagnosed with a concussion and may miss the Packers' game Sunday against Miami.

Green Bay Coach Mike McCarthy said Monday Rodgers was injured on the Packer's final offensive play. He threw an interception on the play, a turnover that set up the Washington Redskins' game-winning field goal.

"That thing was fairly evident, just based on the communication," McCarthy said. "There was no evidence or even talk of Aaron during the course of the fourth quarter. But he took a helmet-to-helmet blow there on the last play and, if you watch the tape, just the way he reacted and so forth, that's when it did occur."

He said Rodgers would, at a minimum, miss practice time this week as he goes through the NFL's protocols regarding concussions.

McCarthy also said linebacker Nick Barnett and tight end Jermichael Finley will undergo surgery because of injuries. Barnett has an injured wrist and a timetable for his return won't be set until after Wednesday's procedure. Finley has a knee injury but McCarthy said, "I would be surprised if it's season-ending."

The Packers said tight end David Lee may miss a couple of weeks of playing time because of a chest sprain and linebacker Clay Matthews suffered a hamstring strain. Safety Derrick Martin is said to have a "pretty significant" knee sprain and will likely miss more than a few weeks.

NFL // 13 hours ago
Panthers coach Matt Rhule: RB Christian McCaffrey to miss 'a few weeks'
Sept. 24 (UPI) -- Carolina Panthers star running back Christian McCaffrey will miss at least a few weeks due to the hamstring injury he suffered during Thursday night's game against the Houston Texans.

Sports News // 14 hours ago
Ryder Cup: U.S. takes historic early lead over Europe after first day
Sept. 24 (UPI) -- The United States grabbed a 6-2 lead over Europe at the Ryder Cup on Friday for its largest opening-day advantage at the event since 1975.