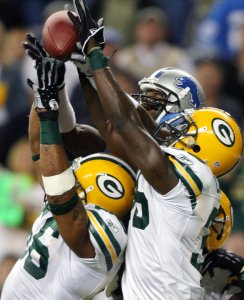 We've just got to go hard for 48 minutes Tuesday, and see what it gets us

In Sports from United Press International May 27, 2003

Nicholas Alexander Barnett (born May 27, 1981 in Barstow, California) is an American Football linebacker who plays for the Green Bay Packers of the NFL. A graduate of Fontana A.B. Miller High School in Fontana, California, the Packers drafted him out of Oregon State University in the first round of the 2003 NFL Draft with the 29th overall selection.

Barnett and his defensive teammates had not had a steady defensive coordinator for more than four years. In 2006 the Packers hired Bob Sanders as their fourth defensive coordinator in as many years. Despite instability in the coaching staff, Barnett has consistently posted impressive statistics. Barnett had anchored the young linebacking corps ever since his rookie year in 2003, and has been the starting middle linebacker of the Green Bay Packers from Day 1 of his NFL career. With the team's shift to the 3-4, however, he was moved to inside linebacker.

FULL ARTICLE AT WIKIPEDIA.ORG
This article is licensed under the GNU Free Documentation License.
It uses material from the Wikipedia article "Nick Barnett."