Cool Coal Man is the latest newcomer in the Kentucky Derby picture, pulling off a mild upset in Sunday's $350,000 Fountain of Youth Stakes at Gulfstream Park.

And, as the 3-year-olds began to shake out in the U.S. Triple Crown picture, horses around the world were getting final preps for the year's biggest day of racing, the March 29 Dubai World Cup and its stellar supporting card. The favorite for the World Cup, reigning U.S. Horse of the Year Curlin, is slated to have his final prep Thursday over the Nad al-Sheba track.

Cool Coal Man, a Nick Zito-trained son of Mineshaft, finished seventh in his only previous stakes start -- the Kentucky Jockey Club at Churchill Downs in November. He took two months off, then came back with a dominating allowance win at Gulfstream and went to the post Sunday at odds of more than 7-1.

After cruising comfortably off the pace under jockey Kent Desormeaux, the Kentucky-bred colt came three-wide to challenge for the lead turning for home. He quickly opened up a decisive advantage and held on to win by 1/2 length over Elysium Fields. Court Vision finished third and the favorite, Monba, was never a factor, finishing last of 12.

"When he got the lead, he started to look around and he idled," Desormeaux said. "I stopped hissing at him for about 40 yards and, when I started back, he took off again."

Zito said he's not sure where Cool Coal Man will run next. "Possibly in the (March 29) Florida Derby. He's not a big horse. He'd need to have a good 30 days from now. We'll see."

Elsewhere on the Kentucky Derby Trail:

-- In the $250,000 Southwest Stakes at Oaklawn Park on Presidents' Day, Denis of Cork rallied three-wide on the turn and rolled home an impressive, 2 1/4-lengths winner over Sierra Sunset. Liberty Bull and Sacred Journey dead-heated for third and fourth. Denis of Cork, a Florida-bred colt by Harlan's Holiday out of the Unbridled mare Unbridled Girl, ran the 1 mile in 1:37.89. Robby Albarado rode for trainer David Carroll.

-- Ferragamo was off a jump slow in Saturday's $50,000 Mountain Valley Stakes at Oaklawn. But, with Joe Johnson riding, the Kentucky-bred Vindication colt rushed up to the lead and went on to win by 1 3/4 lengths. Carson's Legacy finished second and Sebastian County got home third. The 6 furlongs went in 1:09.9. Ferragamo now has three wins from four starts.

-- Little Belle pressed the pace in Sunday's $75,000 Busher Stakes before taking charge in the stretch to win by 2 3/4 lengths. Sweet Vendetta was second and Darling Monique was far back in third. The favorite entry of Love Do and Delites Day finished fourth and fifth, respectively, after Love Do set the early pace. Little Belle, a Kentucky-bred daughter of A.P. Indy out of the Mr. Prospector mare Dubai Belle, ran the 1 1/16 miles on the fast inner track in 1:44.32. Rajiv Maragh rode the Darley Stable homebred for trainer Kiaran McLaughlin.

-- Valentine Fever hit another gear in the final yards of Saturday's $50,000 Valdale Stakes at Turfway Park, just getting up in time to win by a nose over Love Buzz. Lovers Spat completed the week-late, "Valentine's love" hunch trifecta (worth $511). Valentine Fever, with Thomas Pompeii aboard, ran the 1 mile on the main track in 1:39.44. Pompeii said trainer Greg Foley "told me he thought she'd be laying close, and if she was doing it easy, I should just keep her there. Or, if we got an easy lead, then slow it down." Valentine Fever, a Kentucky-bred daughter of Stormin Fever, will point to the Boubonnette Oaks on the Lane's End undercard and then, if that works out, the Kentucky Oaks.

In Hong Kong, Viva Pataca dominated Sunday's Group I Citi Hong Kong Gold Cup, putting himself "on target" for the Dubai Sheema Classic March 29, trainer John Moore said. With Darren Beadman handling the reins, Viva Pataca shot to the front at the top of the straight and won by 2 3/4 lengths over Floral Pegasus, going away. Bullish Luck was third. "The further he goes, the better he gets," Beadman said. "So the mile-and-a-half in Dubai should suit him down to the ground." Added Moore: "The task now is to hold him at this level of form. If we can do that, he will have a good chance in the Sheema Classic." Last year, Hong Kong's Vengeance of Rain won the Citi Gold Cup en route to winning the Sheema Classic.

In Japan, last year's fourth-place finisher in the Dubai World Cup, Vermillion, dominated his rivals in Sunday's Group 1 February Stakes and is headed back to the Middle East for another try at the big prize. Vermillion took the lead turning into the stretch, tossed off a challenge when asked by jockey Yutaka Take and won by a widening margin. "I believe the horse is superior to what he was 12 months ago," said Shunsuke Yoshida, head of the ownership syndicate, Sunday Racing.

In Dubai, meanwhile, Archipenko moved into the picture for the Dubai Duty Free with a victory in Thursday's Al Fahidi Fort. Among those trailing Archipenko home was the favorite, Linngari. Winning trainer Mike De Kock said Archipenko has "improved significantly from his first run. But it was hard to be confident when you're facing a horse like Linngari."

And, the reigning U.S. Horse of the Year, Curlin, is in Dubai, had his first workout at Nad al-Sheba on Saturday and is primed for a prep race on Thursday at 2,000 meters (1 1/4 miles). "Curlin gets over the ground here really well," said Scott Blasi, assistant to trainer Steve Asmussen. "He's anxious to do something. He did things the right way this morning and I think Steve will be pleased."

-- Einstein saved ground early in Saturday's $350,000 Gulfstream Park Turf Stakes, stalked the pace down the backstretch and then won a sprint to the wire by a neck over Dancing Forever. Stream of Gold, the favorite, was 3 lengths farther back in third. Einstein, a 6-year-old, Brazilian-bred son of Spend a Buck, ran the 1 3/8 miles on firm turf in 2:12.87 with Jose Lezcano up for trainer Helen Pitts. Einstein has made the Gulfstream Park Turf Stakes a favorite effort, winning in 2006 and finishing third last year in a rough trip. Pitts said she had been pointing to the Melvin Muniz Jr. Memorial at Fair Grounds in New Orleans -- a race Einstein won last year. "But he was doing so well, we decided to go ahead" and run at Gulfstream, she said. "We'll see how he comes out of this before we decide whether to go back to New Orleans in just two weeks. We'll do the right thing for him."

-- Spring House rallied three-wide to the lead at midstretch in Saturday's $150,000 San Luis Obispo at Santa Anita drew off easily to win by 2 1/4 lengths. Church Service beat On the Acorn by 3/4 lengths for second. Spring House, a 6-year-old, Kentucky-bred gelding by Chester House, ran the 1 1/2 miles on firm going in 2:27.21. Garrett Gomez rode for trainer Julio Canani. Despite trailing early, Gomez said: "I was comfortable with where I was … My main concern was keeping him out of trouble." Spring House had been idle since finishing third in the Hollywood Turf Cup on Dec. 8. "With good horses, I like to space their races a little bit," Canani said. But he added it may be only a bit more than a month until the next one -- either the 1 1/4-mile Dubai World Cup or the Dubai Sheema Classic, at 1 1/2 miles on the Nad al-Sheeba grass.

-- Cosmonaut, the odds-on favorite, surged to the lead on the second turn in Saturday's $150,000 Tampa Bay Stakes at Tampa Bay Downs, opened a nice lead and then held on doggedly to win by 3/4 length over Ballonenostrikes. Soldier's Dancer was third. Cosmonaut, a 6-year-old, Kentucky-bred son of Lemon Drop Kid, finished the "about" 1 1/16 miles on soft turf in 1:44.14. Edgar Prado had the mount for trainer Philip Serpe. "When the horse came to me, he caught another gear," Prado said. "I pressed the button and he responded very well." Despite still looking for his first Grade I win, owner Carl Lizza called Cosmonaut "one of the top grass horses in the country." He said he may seek that Grade I win in the Maker's Mark Mile at Keeneland this spring.

Candy Ball went quickly to the lead in Saturday's $150,000 Bayou Handicap for fillies and mares, extended the advantage and won by 3 1/2 lengths over Swingit. Platinee finished third and the favorite, Autobahn Girl, checked in fourth. Candy Ball, a 6-year-old, Kentucky-bred daughter of Lemon Drop Kid, ran the 9 furlongs on a fast track in 1:52.21 under Miguel Mena. "She was really very comfortable and relaxed for me all the way," said Mena. "I couldn't have asked for anything better."

Tiz Elemental came from near the back of the field to win Sunday's $100,000 Honest Lady Stakes for fillies and mares by 3/4 length over Glorified. Selvatica finished third. Tiz Elemental, a 4-year-old, California-bred filly by Cee's Tizzy, ran the 6 furlongs on the all-weather track in 1:11.09. Victor Espinoza rode for trainer Carla Gaines.

Runway Rosie got the outside position in the stretch drive in Saturday's $75,000 Rare Treat Handicap and won by a head over Wild Hoots. Stage Luck, the favorite, ran third. Runway Rosie, a 4-year-old, Kentucky-bred filly by Include, ran the 9 furlongs on the fast inner track in 1:48.83. Rajiv Maragh rode the winning filly for trainer Gary Contessa.

All Smiles provided some frowns at the end of Saturday's $60,000 Maryland Racing Media Handicap for fillies and mares. After finishing first, by 3 1/2 lengths, All Smiles was set down by the stewards for crossing in front of Cryptoquip in the stretch run and the order of finish was reversed. Hanalei Bay was third. The 9 furlongs on a fast track was timed in 1:54.31. Cryptoquip, a 5-year-old, Ohio-bred mare by Cryptoclearance, was ridden by Jeremy Rose. Luis Garcia rode All Smiles.

Run Right Thru stalked the pace in Saturday's $50,000 Teresa Handicap for fillies and mares, got to the front on the turn and got home first, 3/4 length to the good of Sweet Ambition. Goodbye Norma Jean was third. Run Right Thru, a 4-year-old, Kentucky-bred filly by Montbrook finished the 6 1/2 furlongs on a fast track in 1:16.27 under Alfredo Juarez Jr.

Broke Sharply broke in mid-pack in Sunday's $50,000 Curribot Handicap, raced there until the top of the stretch, then shot to the lead and held on to win by a neck over Red Rock Creek. Takin Issue finished third. Broke Sharply, a 6-year-old, Kentucky-bred gelding by With Approval, ran 1 1/16 miles on a fast track in 1:43.19 under Duane Sterling.

Reba Is Tops came out on top in Saturday's $50,000 Bay Meadows Distaff Sprint, overhauling the early leader entering the stretch and holding well to win by 1 length over La Cocasse. Royal Kleven finished third. Reba Is Tops, a 4-year-old, Washington-bred filly by He's Tops, got the 6 furlongs in 1:10.37 with Russell Baze up for trainer Bud Klokstad.

News and Notes: Seven horses, three jockeys and a pair of trainers are finalists for this year's induction class at the National Museum of Racing's Hall of Fame. Contemporary male horses who made the list are Best Pal, Manila and Tiznow (maybe next year for Black Tie Affair). Contemporary female horse nominees are Inside Information, Open Mind, Silverbulletday and Sky Beauty. The jockeys are Edgar Prado, Randy Romero and Alex Solis and the trainers are Carl Nafzger and Robert Wheeler.

NFL // 11 hours ago
Leonard Fournette, Tom Brady lead Buccaneers past Eagles
Oct. 15 (UPI) -- Tom Brady threw two passing touchdowns and Leonard Fournette piled up 127 yards from scrimmage and scored twice on the ground to lead the Tampa Bay Buccaneers over the Philadelphia Eagles in the first game of Week 6.

MLB // 11 hours ago
Dodgers, controversial call end Giants' season in Game 5 of NLDS
Oct. 15 (UPI) -- After chasing the Giants in the National League West division all season, the Dodgers finished off their Northern California rivals in the playoffs on Thursday night -- in a game that ended on a controversial call. 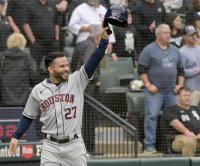