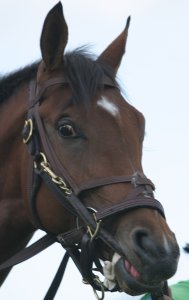 Jeremy Rose (born April 1, 1979 in Bellefonte, Pennsylvania) is an American Thoroughbred racehorse jockey. He began his career as a professional rider at Delaware Park in Wilmington, Delaware and in 2001 was his breakout year and he was voted the United States' Eclipse Award for Outstanding Apprentice Jockey.

In 2005, Rose guided Afleet Alex, to victory in two American Classic Races, the Preakness and Belmont Stakes. His performances that year earned him the ESPY Award as the top American jockey of 2005. He earned his 1000th career victory at Delaware Park on July 3, 2005.

FULL ARTICLE AT WIKIPEDIA.ORG
This article is licensed under the GNU Free Documentation License.
It uses material from the Wikipedia article "Jeremy Rose."
Back to Article
/