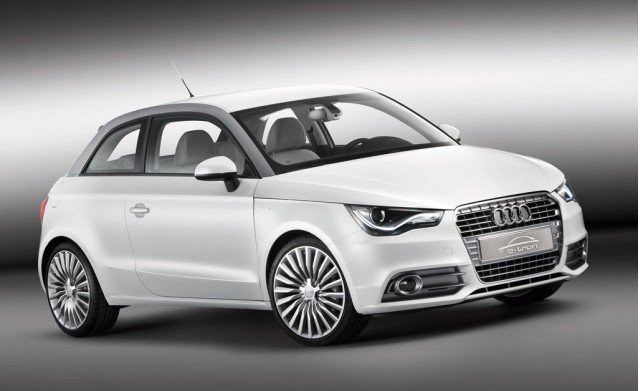 The Audi A1 e-tron concept car (pictured above). Audi's A2 Electric Hatchback is set to go on sale by 2013.

BERLIN, Oct. 26 (UPI) -- An electric car developed by a German company Tuesday set what organizers said is a world record when it drove 375 miles without recharging its battery.

Mirko Hannemann, 27, drove the yellow and purple all-electric Audi A2 in seven hours from Munich to Berlin, where he arrived Tuesday morning.

German Economy Minister Rainer Bruederle, who jumped inside for a quick drive in the courtyard of his ministry, called Hannemann's trip a technological quantum leap.

"No other electric car has gone to such a distance," he said.

Japanese scientists drove a 1-person electric car more than 600 miles around a track, but that was at 25 miles per hour and with a vehicle that was basically all battery.

"Today, we have shown what everyday cars can do," said Hannemann, the chief brain behind DBM Energy, a startup from Berlin that developed the powerful battery pack that made the long trip possible.

Consumers have so far been put off by the short driving range of electric cars, usually at between 60 and 100 miles, and by the cost and size of the batteries.

The four-seat Audi A2, funded by German utility lekker Energie and the German Economy Ministry, has all features of a regular car, including a fully usable trunk.

Hannemann drove the 375 miles at 55 miles per hour on average, had the heat on and was able to whisk around a few more miles in the city.

The battery, based on what DBM Energy calls the KOLIBRI AlphaPolymer Technology, comes with 97 percent efficiency and can be charged at virtually every socket. Plugged into a high-voltage direct-current source, the battery can be fully loaded within 6 minutes, Hannemann said.

"This is a great success," said Andreas Goerdeler of the German Economy Ministry. "We are in a fierce global competition and this proves that we're technological leaders."

Eager to reduce the dependency on imported oil and cut carbon dioxide emissions from road traffic, the German government last year said it wants to have 1 million electric cars cruise its highways by 2020.

Germany's powerful car industry has been criticized for being a tad late to the electric car game, with rivals from France and mainly Asia one to two years ahead when it comes to launching serial production.

To speed up this process, the German government has earmarked around $700 million for sustainable mobility research and development, including programs to develop the charging station infrastructure and boost battery technology, an area of expertise that has long belonged to Asia. Berlin supported Hannemann's record project with $380,000.

The young inventor hopes that his battery pack can challenge the Asian dominance. Key will be if it's affordable.

Hannemann couldn't give an exact price for his battery -- he said that was dependent on scaling effects -- but vowed it wouldn't just be more powerful, but in the end also cheaper than conventional lithium ion batteries.

A logistics company has put the DBM Energy battery packs into their forklifts, which are now running 28-hour shifts without recharging.

"We are open for talks with the car sector," he said.

Asked when his company would be able to launch large-scale production, Hannemann replied: "Optimistically? Now."