Feb. 10 (UPI) -- A Finnish artist gathered a group of snowshoe enthusiasts to create a work of art on a golf course that can only be seen from the sky.

Janne Pyykko said he came up with the idea for a snow illustration artwork about two weeks ago, leading him to recruit members of a snowshoeing group on Facebook to help implement his design.

"I was interested in the social side of the experiment--could I make the instructions good enough and also be able to guide the others?" Pyykko told Yle, Finland's national public broadcasting company.

Pyykko designed a snowflake pattern that would allow the snowshoeing volunteers to create the patterns while leaving other areas untouched.

The design was finished Sunday at the Lofkulla Golf course in Espoo.

The artist said the work will eventually be covered by fresh snow or it will melt. He said the temporary nature of the piece is part of its meaning.

"The idea is that the area isn't damaged, but something that will disappear on its own," he said.

Odd News // 15 hours ago
North Carolina family reunited with lost cat after four years
March 8 (UPI) -- A North Carolina woman whose cat went missing in 2016, just before a hurricane hit the area, was reunited with her now 20-year-old pet after the feline was found a few miles from her home. 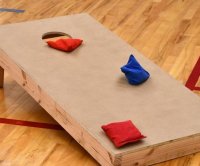 Odd News // 16 hours ago
Company offers to pay someone $1,000 to play cornhole
March 8 (UPI) -- A lawn care company is seeking an outdoor gaming enthusiast to make $1,000 by playing cornhole, a game involving tossing small bags of corn into holes in a board.