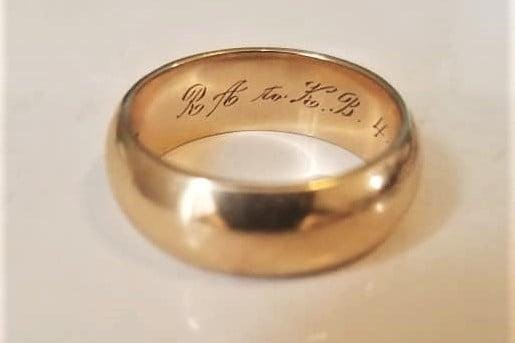 Feb. 10 (UPI) -- A woman who lost her wedding ring nearly 50 years ago in Chicago will soon be reunited with the long-lost item thanks to the story of a person who more recently lost his ring.

Karen Autenrieth said she lost her wedding ring in the snow in 1973, while she was helping her three kids, ages 2, 3 and 4, get into the car.

"It was very cold and the snow plows had plowed the snow up onto the curbs," Autenrieth told the Chicago Tribune. "I had parked my car in front of my grandmother's house and I was climbing over mounds of snow, helping each kid get into the car. My hands were cold -- I didn't have mittens on -- and my ring just flew into the snow."

Autenrieth eventually gave up the search, but the ring was found eight years ago by a woman who was gardening at her home, which is in the same area where Autenrieth's grandmother used to live.

The woman who found the ring detailed the discovery recently in the comments under a Chicago man's Facebook post about his own wedding ring, which was lost in Chicago during a more recent snow storm.

The comment thread came to the attention of the Ridge Historical Society, which offered to help the woman find the owner of the ring.

The researchers used the ring's inscription, "RA to K.B. 4-16-66," to begin their search, and they were eventually able to find Autenrieth's maiden name -- Karen Berk -- by researching the history of her family in the area.

Carol Flynn, a researcher at Ridge Historical Society, found Autenrieth on Facebook and sent her a message.

"I sent her this really enthusiastic, completely disjointed message at 2:30 in the morning," Flynn said. "I went to bed thinking, 'She's probably going to think some crazy lady is trolling her.'"

Karen responded that the ring was indeed hers, and she is still married to her husband, Robert -- the "RA" from the ring's inscription.

The ring is now on its way to San Antonio, Texas, where Autenrieth said her husband will place the ring back on her finger during a family gathering on Valentine's Day.

Lion wanders onto hotel grounds in Indian city Man wins $292,906 lottery jackpot on his 82nd birthday Police round up herd of cows on Indiana highway

Odd News // 1 day ago
Florida man finds bear sleeping on his front porch
Dec. 2 (UPI) -- A Florida man who was alerted to the presence of a bear in his neighborhood discovered the animal taking a nap right outside his front door.

Odd News // 1 day ago
Owl recovering after rescue from Connecticut road
Dec. 2 (UPI) -- An owl struck by a car on a Connecticut road was rescued by a bystander and is expected to make a full recovery.

Odd News // 1 day ago
Up to 30 cows escape crashed trailer on Arizona highway
Dec. 2 (UPI) -- Transportation officials in Arizona said up to 30 cows were loose on a highway after a crash involving a cattle trailer.

Odd News // 1 day ago
Two escaped emus captured in Ohio, unrelated emu still on the loose
Dec. 2 (UPI) -- Officials in an Ohio county said two escaped emus were rounded up this week -- but another emu remains on the loose in the area.

Odd News // 2 days ago
Home Depot workers track down owner of dropped $700 cash
Dec. 1 (UPI) -- Employees at a Home Depot store in Tennessee worked together to track down the owner of $700 cash found in an envelope dropped in an aisle.

Odd News // 2 days ago
Polar bear gives birth to twins at Ohio zoo
Dec. 1 (UPI) -- The Toledo Zoo in Ohio announced the birth of twin polar bears, but the newborns won't be on public display until next year.
Advertisement