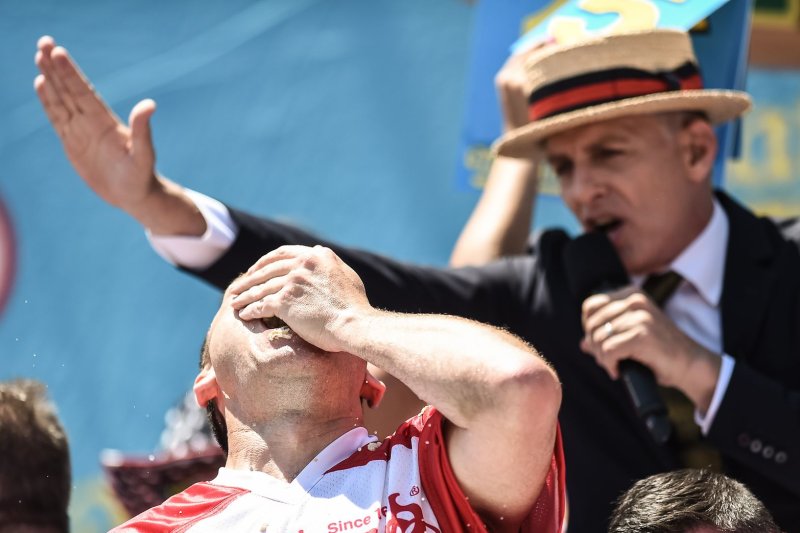 Organizers of the annual July 4 event in the Coney Island section of Brooklyn previously announced measures to keep the competitors and workers safe amid the COVID-19 pandemic, including moving the contest from outside the eatery to an indoor venue without a live audience.

Chestnut, 36, a 12-time champion of the hot dog eating contest, told UPI this week that he sees potential positive and negatives to the measures in force Saturday.

"I think it's a little bit of a benefit, being indoors, just because I won't be exposed to ridiculous weather," he said. "Coney Island has the potential to be really hot and humid on the Fourth of July, so we're avoiding that, and also there can be rain."

The largest drawback to the changes is the lack of a live crowd, Chestnut said.

"I definitely wish I was in front of an audience," he said. "I just have to remember there are going to be millions of people watching on ESPN, and use that as motivation."

"Depending on how they prepare the dogs, I feel like they'll cool down more inside than they do in the sun, so hot dog quality might go down a little bit," which could make them more difficult to swallow quickly, he said. "So there's a trade-off."

Chestnut said the coronavirus pandemic also disrupted his preparations for the competition when he had to fly from his home in California to New York five days early to avoid an expected travel ban. He said the change in plans forced him to cancel his final practice for the contest.

"It was good that I came in early. I think a couple of the other eaters might not be able to attend," he said.

Major League Eating, the governing body that organizes professional competitive eating events, confirmed that New York's travel restrictions forced popular competitors Matt Stonie and Gideon Oji to withdraw from this year's contest, and they will be replaced by alternates.

Chestnut said he doesn't expect to deviate much from his usual strategy: eating two hot dogs at a time, followed by two buns, one at a time.

He said the first thing he does at the start of the contest is touch the food to gauge the freshness of the hot dogs and buns. Chestnut said this allows him to "set realistic goals for each minute during the contest."

"If the hot dogs are really fresh and the buns aren't too stale, I'll think, 'Oh, wow, my first minute should be about 14 hot dogs, and then the second minute should be 11 or 12,' I start having goals really, really quick."

He said there is a danger in setting his goals too high too early in the contest.

"Any more than 14 hot dogs in the first minute, that probably means I'm swallowing huge chunks of meat, and then it's not going to feel right later. It's going to slow me down," he said.

"If I'm swallowing huge chunks of meat, that means I'm straining certain muscles in my throat, and those are going to most likely get tired earlier in the contest."

Chestnut said he uses "a couple of tricks" to track his total and measure his pace while eating. He said the secret is the cups of water he uses to dunk the hot dog buns, which makes them easier to swallow quickly.

"After my 10th hot dog, every time, I start dunking into a different cup, so then I can see what cup I'm on," he said, explaining this helps him make sure he is sticking to his ideal pace.

The cup system also helps Chestnut keep track of how much water he's taking in while eating, he said.

"If my cup at the end of 10 hot dogs is extremely empty, that means I'm taking in more water, and I'm going to be more full at the end of the contest. If there's still a ton of water in there ... it's more work to swallow the buns.

"So I have to keep that perfect balance of enough water to get the food down quickly and efficiently, without so much water that it takes up my capacity."

Chestnut, who has been competing in eating events for 15 years, said the strategy is the result of years of training to strengthen his throat muscles, as well as numerous "trial and error" experiments.

"I made journals about how I was practicing," he recalled. "I've put a lot more research and development into it than any other competitive eater."

"When I was younger, I would do crazy things to push my body to new limits. I feel like if I knew my body as well as I do now when I was 25, I'd probably be doing a ridiculous number now," he said.

"But right now, I think I can still put up a new record just by knowing my body as well as I do, and knowing how to push it."

Chestnut broke the world record at the 2018 Nathan's Famous Hot Dog Contest, finishing 74 hot dogs and buns in the 10-minute time limit. Chestnut fell just short of his record in the 2019 contest, winning with 71 hot dogs.

The veteran speed-eater has more than a dozen other world records for foods as varied as pizza, carnitas tacos, boysenberry pie, ice cream sandwiches, gyros, hard-boiled eggs and buffalo wings. In February, he set a world record by eating 32 McDonald's Big Macs in 38 minutes.

Chestnut said he would like to add even more variety to his world record titles by traveling to other countries and taking on their local cuisine.

"I'd go to Scotland and eat haggis, it would be awesome to have the world record for haggis," he said, referring to the traditional Scottish dish of sheep organ meats cooked inside a casing of the animal's stomach. "Or go to England and get the fish and chips record, I think that would be cool."

He said he wouldn't have to leave the country to take on the one eating challenge that he's been avoiding for years: the annual New Orleans Oyster Festival.

"I've never done it, I've been kind of scared of it. It's oysters -- raw oysters," he said. "I'm going to have to build a tolerance for the texture of raw oysters, because I am not the biggest fan, but it's just an amazing contest. It's a huge festival, and it's a great atmosphere, and I want to win that title before I'm done."

The Nathan's Famous Hot Dog Eating Contest begins at noon Saturday. The competition will be aired live on ESPN.

Odd News // 18 hours ago
California city hunting aggressive turkey that forced park closure
Aug. 13 (UPI) -- Officials in a California city said they are attempting to capture and relocate a wild turkey that was a longtime beloved resident before becoming so aggressive he forced the closure of a local park. 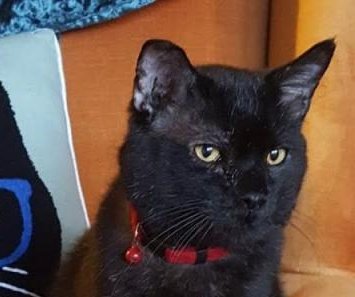 Odd News // 18 hours ago
Boar swims out of Baltic Sea, causes beach chaos
Aug. 13 (UPI) -- A peaceful day on a German beach turned to chaos when a wild boar swam out of the Baltic Sea and ran loose through crowds of sunbathers. 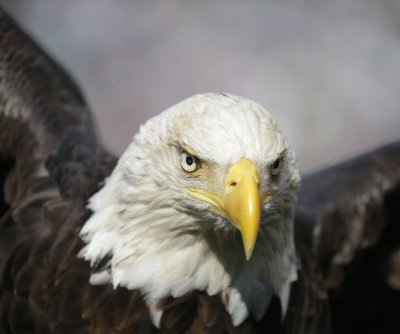 Odd News // 19 hours ago
Eagle sends drone to 'watery grave' in 'brazen attack' over Lake Michigan
Aug. 13 (UPI) -- Michigan state officials said a drone mapping shoreline erosion in the Upper Peninsula was sent to a "watery grave" in a "brazen attack" by a bald eagle.

Odd News // 21 hours ago
Anglers rescue drowning moose in Lake Superior
Aug. 13 (UPI) -- A pair of Ontario men out fishing in a boat ended up rescuing a moose struggling to keep its head above the waters of Lake Superior. 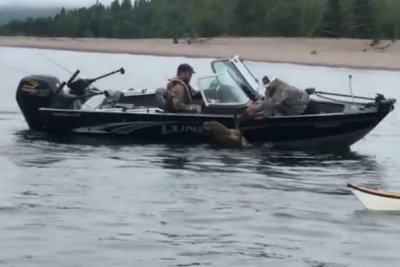