May 20 (UPI) -- A Florida man was reunited with his high school class ring 52 years after it was stolen during his senior year.

Allan Ackles said his 1968 class ring was stolen from his locker at Manatee High School by an unknown thief who took only the ring, leaving his wallet and watch untouched.

"I came back in after football one day and someone had taken the door of my locker and bent my door down and stuck their hand in and the only thing they took out was my class ring that I had just gotten," Ackles told WTVT-TV.

Ackles said he already had been preparing to part with the ring.

"I was all ready to give it to my then-girlfriend, but it never made it there," he said.

He told WTSP-TV the theft left him "extremely mad," but decades passed without any sign of the ring.

Moody Johnson said he was mowing grass on a property about six years ago when he spotted something shiny in the grass.

"I cleaned it up, put it away and just kind of forgot about it," he said.

Johnson said he came across the ring at his home recently and decided to do some amateur detective work.

"I knew that this person probably missed his ring as much as I missed mine," said Moody, who lost his own class ring while serving in the military in Germany in 1968.

Moody enlisted the help of the Manatee High School Alumni Association and the school's football coach. They were able to find a 1968 yearbook and connect the initials "AJA" to graduate Allan Joe Ackles.

Ackles was reunited with his ring Saturday. 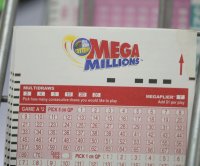 Odd News // 20 hours ago
Facebook apologizes for confusing landmark name with offensive term
Jan. 27 (UPI) -- Facebook has apologized after visitors to a popular seaside landmark in Britain found their posts removed because the name of the location was confused for a misogynistic term. 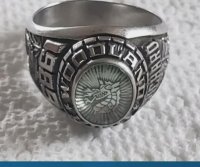