Canadian Kickstarter campaign "Politikats" is seeking funding to produce a line of scratching posts designed to look like political figures. Models include Donald Trump and Barack Obama while stretch goals have been set to produce designs of Vladimir Putin, Benjamin Netanyahu, Bernie Sanders and Hillary Clinton. Screenshot via Politikats/Kickstarter

"Politikats is here to help save your belongings, make your home look stylish but most importantly turn you from crazy cat person to political junkie with a taste for the finer things in life," the Kickstarter page read.

Each scratching post is composed of sisal rope and stands about 26 inches tall. It also includes a 15 x 15 base available in three colors: red, blue and gray.

The campaign is seeking $36,318 to produce the Obama and Trump models and has promised posts designed after Vladimir Putin, Benjamin Netanyahu, Bernie Sanders and Hillary Clinton. They have also promised a life-sized Sepp Blatter post if the campaign reaches $300,000.

If funded, the scratching posts are expected to ship worldwide in August 2016.

Odd News // 13 hours ago
Woman dodging suspected scam calls finds out she won $1.47M lottery prize
Aug. 2 (UPI) -- An Australian woman who dodged multiple calls from what she suspected to be scammers was shocked when she finally answered the phone and learned she had won a nearly $1.5 million lottery jackpot.

Odd News // 15 hours ago
Airborne turtle survives crash through windshield on Florida highway
Aug. 2 (UPI) -- Emergency responders in Florida said they were summoned to an unusual scene where an airborne turtle crashed through a driver's windshield -- and survived. 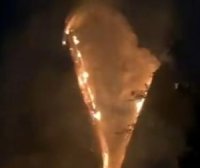 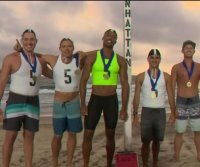 Odd News // 17 hours ago
Man balances 19 glasses on a stick in his mouth, breaks Guinness record
Aug. 2 (UPI) -- An Idaho man broke a Guinness World Record -- and a lot of glass -- when he balanced 19 drinking glasses on a wooden stick held in his mouth.

Odd News // 18 hours ago
Snake found left behind on British Columbia bus
Aug. 2 (UPI) -- The operator of a private bus service in British Columbia is trying to find the owner of an unusual piece of left-behind property: a pet snake.