The moon is waxing. The morning stars are Mercury, Mars, Uranus, Saturn and Neptune. The evening stars are Jupiter, Venus and Pluto.

Those born on this date are under the sign of Leo.

In 1890, the first execution by electric chair was carried out. William Kemmler was put to death at Auburn Prison in New York for the ax murder of his girlfriend.

In 1926, Gertrude Ederle of New York became the first American to swim the English Channel.

In 1945, an atomic bomb was dropped on the Japanese city of Hiroshima. Eight days later, after Nagasaki also was bombed, Japan surrendered, ending World War II.

In 1986, William Schroeder died of a stroke in Louisville, Ky., after 620 days with the Jarvik-7 mechanical heart. He was the longest-living permanent artificial heart patient.

In 1990, the U.N. Security Council voted to impose worldwide economic and military embargo on Iraq as punishment for its invasion of Kuwait.

In 1993, Congress completed action on a $6.2 billion flood relief package.

Also in 1993, Morihiro Hosokawa was elected prime minister of Japan.

In 1995, some 100,000 people attended a memorial service in Hiroshima, Japan, to mark the 50th anniversary of the U.S. atomic bombing that helped end World War II.

In 1996, NASA Administrator Daniel Goldin announced the discovery of evidence of a primitive life form on Mars.

In 2002, doctors in Los Angeles separated 1-year-old Guatemala twin girls joined at the heads in a 22-hour operation.

In 2003, Actor Arnold Schwarzenegger announced his candidacy for governor of California on TV's "The Tonight Show."

In 2004, government reports indicated poor job growth with 32,000 non-farm jobs created in July. Unemployment, however, was down a bit at 5.5 percent.

A thought for the day: it was Will Rogers who said, "Everything is funny as long as it is happening to somebody else." 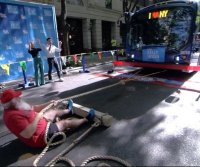