In 1888, the famous comic baseball poem "Casey at the Bat" was first published in the Sunday edition of the San Francisco Examiner.

In 1942, the battle of Midway began. It raged for four days and was the turning point for the United States in the World War II Pacific campaign against Japan.

In 1965, Gemini IV astronaut Ed White made the first American "walk" in space.

In 1985, an accord between Italy and the Vatican ended Roman Catholicism's position as "sole religion of the Italian state."

In 1989, Iran's Ayatollah Khomeini, leader of the Islamic revolution, died.

In 1990, President Bush and Soviet leader Mikhail Gorbachev ended their summit in Washington with commitments to trust and consultation, despite their discord over Lithuania and German unity.

In 1992, U.N. Secretary-General Boutros Ghali opened the largest meeting on the environment in history amid tight security in Rio de Janeiro, Brazil.

In 1993, after reading her writings, President Clinton announced he was withdrawing the nomination of University of Pennsylvania law professor Lani Guinier to head the civil rights division of the Justice Department.

In 1994, North Korea's refusal to allow inspections of two of its nuclear power plants prompted the United States to ask the U.N. about new economic sanctions against Pyongyang.

In 2000, President Clinton and Russian President Putin met in Moscow to discuss a wide range of subjects. But they were unable to agree on the proposed U.S. missile defense system.

In 2003, President George W. Bush, speaking at a summit with Arab leaders in Egypt, renewed his commitment to work for peace between Arabs and Israelis.

Also in 2003, a federal jury in Detroit convicted two of four Arab immigrants of conspiring to provide support to terrorists. They had been arrested shortly after the Sept. 11, 2001 attacks.

And, North Korea accused South Korean navy ships of intruding its territorial waters, warning the border violation would lead to a second war on the Korean peninsula.

In 2004, CIA Director George Tenet, criticized for his handling of the terrorist threat, resigned, effective June 11.

Odd News // 9 hours ago
Alligator found hiding under vending machine at Florida gas station
June 17 (UPI) -- Three sheriff's deputies in Florida responded to a convenience store to help sort out an unusual problem -- an alligator hiding under a vending machine.

Odd News // 10 hours ago
Escaped elk runs loose next to Wisconsin highway before capture
June 17 (UPI) -- Authorities in Wisconsin said an elk that escaped from a farm went for a run along the highway before being safely recaptured.

Odd News // 10 hours ago
Lost class ring found on Wisconsin campus after 45 years
June 17 (UPI) -- A Wisconsin college employee using his metal detector on the campus found a high school class ring underground that turned out to have been lost 45 years earlier.

Odd News // 11 hours ago
Briefcase of old photos rescued from trash at New York park, returned to family
June 17 (UPI) -- A New York man who found a briefcase filled with old photos in a public park trash can was able to reunite the photos with family members of the owners.

Odd News // 11 hours ago
Woodpecker destroys nature camera at Russian nature reserve
June 17 (UPI) -- A nature reserve in Russia said a nature camera disguised as a piece of bark had an unintended consequence when it was destroyed by a hungry woodpecker. 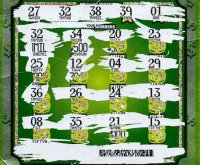