The clip, released on Sunday, pays homage to Samberg's character Jake's favorite movie Die Hard and features Jake, Terry (Terry Crews), Rosa (Stephanie Beatriz) and Amy (Melissa) stuck on the roof of a skyscraper that is about to blow.

Jake heroically and dramatically suggests that the others rappel down while he decides to jump off the roof in order to grab onto a helicopter at the last second. The Brooklyn Nine-Nine crew then applaud Jake and chant his name.

The scenario is just a fantasy of Jake's, however, with the trailer cutting to Jake explaining to Captain Ray Holt (Andre Braugher) how his story would make for a great recruitment video.

Brooklyn Nine-Nine will be making its debut on NBC with Season 6 on Jan. 10. The police comedy previously aired on Fox. 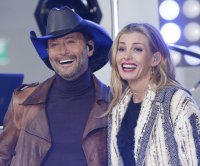