English actress Emma Thompson attends the World premiere of "Men In Black 3" at The Odeon Leicester Square in London on May 16, 2012. UPI/Paul Treadway | License Photo

The movie is based on the true story of how Walt Disney's 1964 classic "Mary Poppins" made it to the big screen. 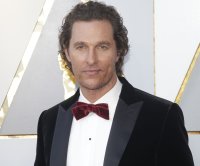