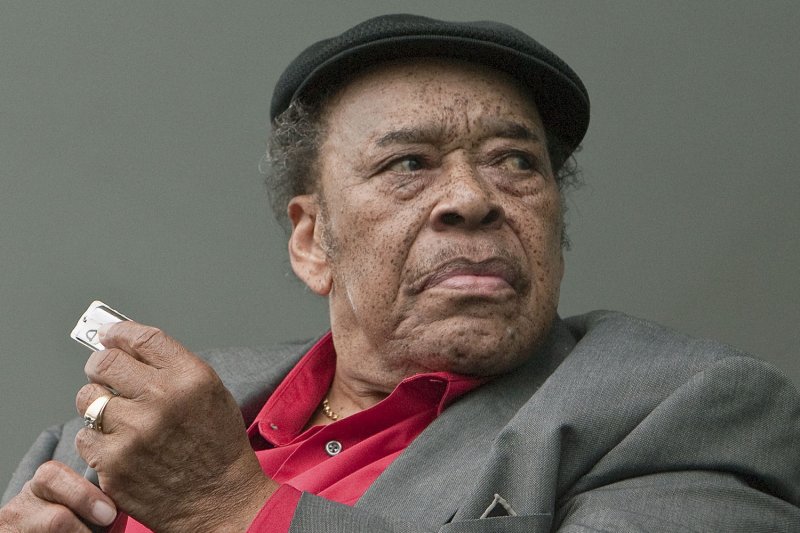 James Cotton performs on the main stage during the three day 2011 Vancouver Folk Music Festival on July 16, 2011. Cotton has died at the age of 81 from pneumonia. File Photo by Heinz Ruckemann/UPI | License Photo

March 17 (UPI) -- Blues harmonica legend James Cotton, known for working with Muddy Waters and Howlin' Wolf, has died at the age of 81.

Cotton died Thursday of pneumonia while being treated at St. David's Medical Center in Austin, Texas, a rep for the musician announced.

Dubbed "Mr. Superharp," Cotton began his career as a teenager by touring with Howlin' Wolf and Muddy Waters, with whom he spent 12 years on the road. Cotton was featured on Muddy Waters' 1960 album At Newport 1960.

In 1966, Cotton formed The James Cotton Band and collaborated with the likes of Janis Joplin, The Grateful Dead and Led Zepplin among others.

Cotton is survived by his wife, Jacklyn Hairston Cotton, daughters Teresa Hampton and Marshall Ann Cotton, and son James Patrick along with his grandchildren and great-grandchildren.

Entertainment News // 1 hour ago
What to stream this weekend: Oscars, 'Mortal Kombat'
April 23 (UPI) -- The Oscars, "Mortal Kombat," "RuPaul's Drag Race" Season 13 finale, "The Falcon and The Winter Soldier" finale, and "A Black Lady Sketch Show" Season 2 are some of the entertainment options streaming this weekend.