Hundreds of New Yorkers packed Adam Yauch Park in Brooklyn to rally against people spreading fear with racism and intolerance, whom a New York state senator said have been emboldened by the election of Donald Trump to the White House. 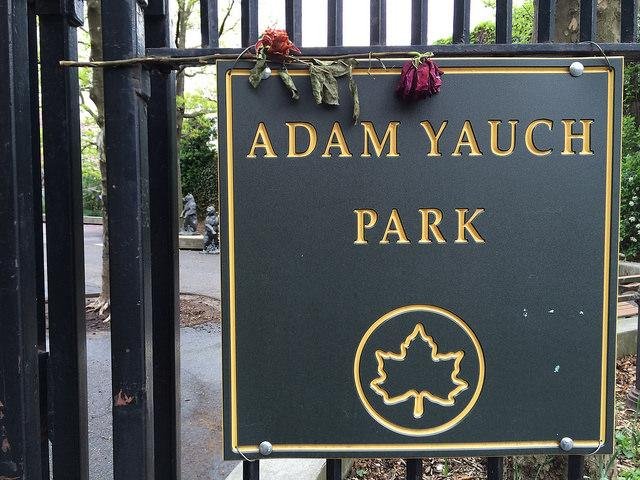 Hundreds of fans rallied with local leaders and Adam "Ad-Rock" Horovitz against racism after Adam Yauch Park in Brooklyn, named for the legendary member of the Beastie Boys after his death in 2012, was vandalized with swastikas and "Go Trump" painted on playground equipment. Photo by Sam Beebe/Flickr.com

NEW YORK, Nov. 21 (UPI) -- The defacing of a park in New York named for Beastie Boy Adam "MCA" Yauch -- the most socially conscious of the three bad brothers we know so well -- drew a large crowd, including another Beastie Boy speaking out against the increase of racists incidents in the last few weeks.

Adam "Ad-Rock" Horovitz spoke during a rally Sunday at Adam Yauch Park in Brooklyn, days after swastikas and "Go Trump" were found painted on equipment at the park.

Yauch, who was Jewish, and also espoused Buddhist philosophy for more than two decades in lectures and in his lyrics, died in 2012 of cancer. After years of self-examination, Yauch made it a point to take back the sometimes misogynist, insensitive lyrics of the Beastie Boys' early years, often dedicating verses or whole songs to rhyming about the practices of nonviolence, empathy and tolerance.

Hundreds of people filled the park Sunday to oppose what New York State Sen. Daniel Squadron said are "people who seem to feel empowered by Trump to spew intimidation and discrimination" -- with the defacement of a children's playground one of hundreds of incidents reported across the country since Trump's win in the presidential election.

"I'm assuming that we're all here today 'cause we're thinking the same thing: spray-painting swastikas at a children's playground is a messed up thing to do," Horovitz said to the crowd. "This is about hate crimes towards Muslims soaring to their highest levels since 9/11. We elected a president that is giving our children the message that it's OK to attack people of color. This is real. We've gotta stand up against hate. If you're able to give money, give to Black Lives Matter. If you're able to protest, protest. If you're able to volunteer, volunteer."

"If you're a musician, write that anthem. Take what you're good at and give to the cause that you care most about. And please keep your eyes open. Stand up for each other. I reject Donald Trump's mission of America. Brooklyn, Bronx, Queens and Staten, from the Battery to the top of Manhattan. Black, white, New York, let's make it happen!" he said.

Horovitz wasn't the only person in the crowd quoting Beasties' lyrics, as chants including "We Gotta Fight For Our Rights" and "No Sleep 'Til No Hate In Brooklyn" were heard, along with support for Black Lives Matter and slogans against President-elect Trump.

Squadron, the New York Police Department and the New York Parks Department are in the process of cleaning the graffiti off of park surfaces, Squadron said, but echoed Horovitz's message that the combination of images meant to spark fear and express hatred left at a playground suggests the problem is getting worse.

"This should make us all worry about and focus on how to make sure that vandalism and intimidation doesn't beget violence, which doesn't beget the sorts of actions that divide the country and are frankly unconstitutional," Squadron said.