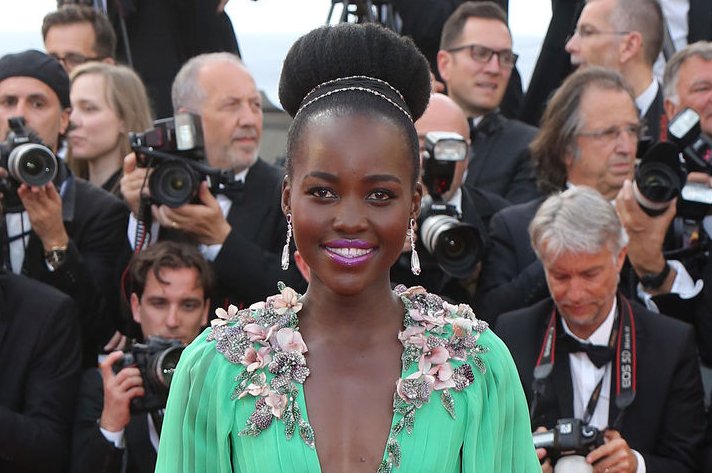 Lupita Nyong'o at the Cannes International Film Festival on May 13. The actress debuted a longer hairstyle at the D23 expo Saturday. File photo by David Silpa/UPI | License Photo

Lupita Nyong'o at the Glamour Women of the Year Awards on November 10, 2014. File photo by John Angelillo/UPI | License Photo

The 32-year-old actress has grown out her hair significantly from the close-cropped style she came to fame with. Her longer locks and bright, striped dress gave her a playful and youthful look at the convention.

Nyong'o was on hand to promote her films Star Wars: Episode VII - The Force Awakens and The Jungle Book. The actress will play the pirate Maz Kanata in Star Wars, and voice the wolf Raksha, Mowgli's adoptive mother, in The Jungle Book.

The star shared photos from the event on Instagram, including a picture of herself with posters for the upcoming movies. "Geekin' out at #Disney #d23expo," she wrote. "Double Duty at Disney #Disney #d23expo #StarWars #ForceAwakens #TheJungleBook."

Nyong'o catapulted to fame after starring in the 2013 movie 12 Years a Slave, and later appeared in Non-Stop with Liam Neeson. The actress is also scheduled for an adaptation of the Tim Crothers book The Queen of Katwe with David Oyelowo.

Movies // 4 hours ago
Disney developing photo-real 'Bambi' movie
Jan. 25 (UPI) -- Disney has named "Bambi" as the next animated movie it will give the photo-realistic treatment.