The deal modifies a contract awarded last fall for the vehicles, which are slated to replace the 40-year-old Amphibious Assault Vehicle, or AAV, which currently transports Marines from ships to shore.

"The exercising of this option validates years of teamwork in partnership with the Marines to provide the most adaptable amphibious vehicle possible to meet their expeditionary needs," John Swift, director of amphibious programs at BAE Systems, said in a press release.

"The ACV was designed to meet the Marines' needs of today while allowing for growth to meet future mission role requirements," Swift said.

The order comes not long after a Department of Defense report released in January noting several problems with the ACV after initial operational testing, including failures of remote weapons stations, hatch and ramp sensors and suspension components. 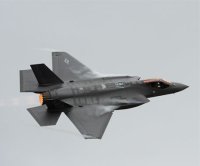 Defense News // 4 days ago
Senate bill would restrict F-35 sales to United Arab Emirates
April 16 (UPI) -- The Biden administration is seeing pushback from Senate Democrats after going ahead with a Trump-era deal to sell F-35 fighter aircraft to the United Arab Emirates.