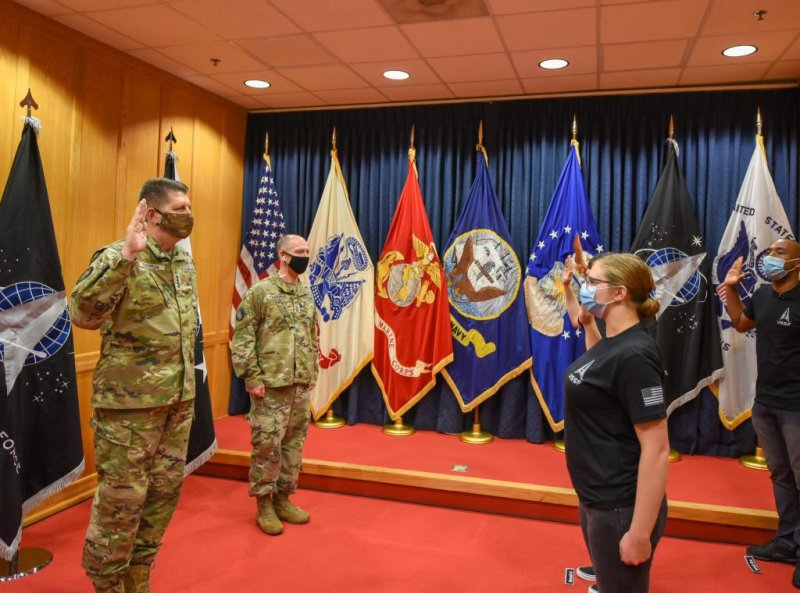 The seven recruits are headed to Lackland Air Force Base, San Antonio, Texas, to begin seven and a half weeks of basic training, according to Space Force.

Vice Chief of Space Operations Lt. Gen. David Thompson, who swore in the first four recruits, said they were among the first to directly enlist into the nation's newest military branch created in December.

Current members of the Space Force, including 86 officers commissioned from the U.S. Air Force Academy this past spring, transferred directly from the Air Force, he added.

"Today is an important milestone as we stand up the Space Force," Thompson said in a statement. "Until now, we've focused on building our initial ranks with transfers from the Air Force. With these new recruits, we begin to look to the future of our force by bringing in the right people directly to realize our aspirations of building a tech-savvy service that's reflective of the nation we serve."

The recruits are from Colorado, Maryland and Virginia and range in age from 18-31, according to Space Force.

Space Force has stated that diversity among its ranks is one of its priorities -- among the new recruits, are two women, five men, two African Americans and five Caucasians.

Hailey Bieber says she has a large ovarian cyst