"The sailors self-reported after experiencing symptoms, received immediate medical treatment, and were transported off the ship for isolation," Harrell told the New York Times, which first reported the new cases.

On Tuesday, the ship left its homeport of San Diego for sustainment exercises, to be followed by two deployments within the same readiness cycle, known as a "double pump."

The names of the affected sailors were not released.

The Navy is also investigating the apparent suicide of a sailor assigned to the ship who shot himself Tuesday morning while standing security watch on a pier at Naval Air Station North Island, near San Diego.

The aircraft carrier spent several months in Guam, earlier this year, after a COVID-19 outbreak infected over one-fifth of the 5,000 sailors aboard the ship, one of whom died. Capt. Brett Crozier was fired after a letter he wrote, pleading for help with the outbreak, was discovered. Thomas L. Modly, acting Navy secretary, was eventually fired as well.

Current Navy rules on handling the pandemic at sea, by which positive cases are isolated, were formed after the outbreak aboard the aircraft carrier, and have proven more effective.

Several sailors aboard the aircraft carrier USS Ronald Reagan tested positive for the virus in September and were flown off the ship to its homeport in Japan. 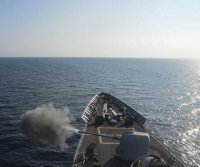