The Nimitz-class aircraft carrier USS Dwight D. Eisenhower returned to Norfolk Naval Station on Sunday after seven months operating in the 5th and 6th Fleet, according to the U.S. Navy.

The Eisenhower arrived along with the Ticonderoga-class guided missile cruiser USS San Jacinto.

The Eisenhower Carrier Strike Group also includes more than 1,800 Navy aviators from Carrier Air Wing Three that returned to their bases in Virginia, Washington and Florida on Thursday and Friday.

"Words cannot express the admiration I have for each and every sailor onboard," Capt. Kyle Higgins, the Carrier Eisenhower's commanding officer, said in a statement.

"These young men and women were thrust into a situation no one could have predicted and they responded as only Navy Sailors can -- they adapted and overcame the adversity," Higgins said. "I witnessed their excellence day in and day out as they accomplished repairs never before attempted at sea."

"I am deeply humbled to have the privilege of working alongside them," Higgins continued. "They are what make our Navy the greatest fighting force the world has ever seen."

On May 14, sailors from the Eisenhower and San Jacinto crossed the equator after more than 100 days at sea, becoming the Navy's first "Iron Shellbacks."

Later on, they set another Navy first, surpassing 160 days at sea without porting once because of the COVID-19 pandemic, the Navy said.

The bulk of deployment was in the U.S. 5th Fleet where they participated in operations around the Gulf Of Oman and the North Arabian Sea as part of Operation Sentinel to maintain stability in the region. 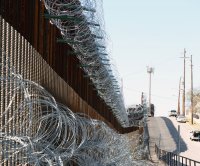