Crude oil slides to less than $99

Talks between Greece and creditors resumed this week but with no major breakthrough reported. With no deal reached, it is possible Greece will not be eligible for the next disbursement of funds from an international bailout facility. This could put Greece in default by the end of March and force it out of the 17-member eurozone.

At the pump, the national average price of unleaded gasoline rose to $3.382 per gallon from Thursday's $3.378, AAA said.

Defense News // 15 hours ago
Raytheon awarded $641.3M for work on Tomahawks for Navy
March 27 (UPI) -- Raytheon Missile Systems received two contracts totaling $641.3 million Friday for work on Tomahawk Missiles for the Navy, according to the Department of Defense. 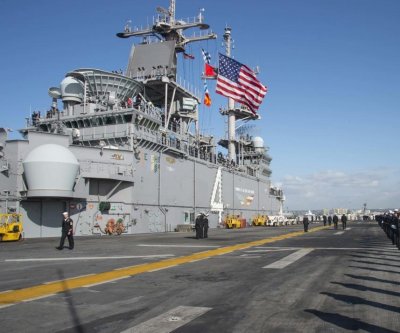 Defense News // 16 hours ago
BAE awarded $2003.M to modernize USS Boxer
March 27 (UPI) -- BAE Systems was awarded a $200.3 million contract for work on the USS Boxer during its docking and selected restricted availability.