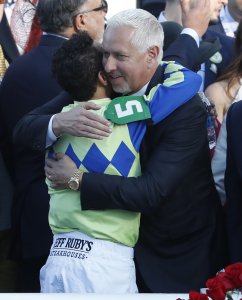 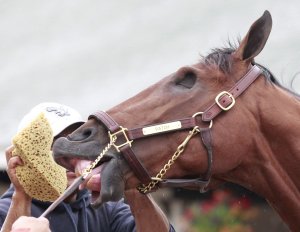 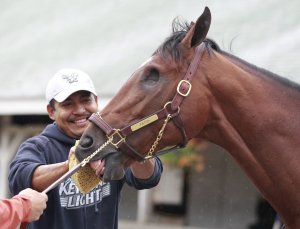 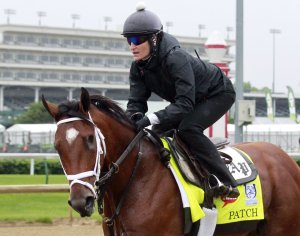 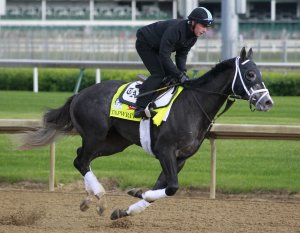 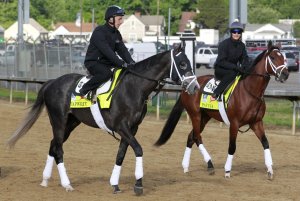 Sports News // 5 days ago
Life Is Good wins Whitney, Godolphin 3-year-olds sweep Saratoga turf races
Life Is Good dominated the Whitney, turning back old foes and new, and is on course for a year-end test in the Breeders' Cup Classic.

Sports News // 1 week ago
Life Is Good, Olympiad square off in the Whitney, highlighting weekend racing
A heavyweight edition of the Grade I Whitney and an internationally flavored turf tilt at Saratoga top a rich weekend schedule as horse racing hits its summertime stride.

Sports News // 1 week ago
Epicenter back in picture for 3-year-olds after Jim Dandy win
Epicenter, after bitter disappointments in the Kentucky Derby and Preakness, is back in the top ranks of the 3-year-old division after a nice win in the Jim Dandy at Saratoga.

Sports News // 2 weeks ago
Star-studded weekend racing featured across U.S.
Dubai World Cup winner Country Grammer is back in action in a blockbuster edition of the Grade II San Diego Handicap at Del Mar -- a highlight of weekend horse racing.

Sports News // 2 weeks ago
Victories by Cyberknife, Clairiere, Nest, Pyledriver top weekend horse racing
Weekend horse racing featured some classic confrontations that could develop into long-running rivalries, but much still remains to be decided before year-end honors are handed out.

Sports News // 3 weeks ago
Big matchups at Saratoga, Monmouth point toward year-end racing honors
A hot summer weekend of horse racing has a rematch between the Kentucky Oaks winners, with Malathaat meeting Clairiere for the sixth time,.

Sports News // 4 weeks ago
Saratoga opens summer racing season with a bang
Saratoga is off and running with action from the 2-year-olds all the way up to returning Breeders' Cup winners.

Sports News // 1 month ago
U.S. 3-year-olds turn back Europeans in big Belmont Turf horse races
Some feisty American 3-year-olds upheld national honor against foreign invaders in the big New York turf races this weekend but the competition will get tougher as the series heads to Saratoga.

Sports News // 1 month ago
Mandaloun, Life Is Good, Ce Ce return in July Fourth weekend horse racing
Top performers in many of horse racing's divisions are back in action during the Fourth of July weekend with even more top-level action in France, Germany, England and South Africa.

He was a month away from debuting but we knew he was a pretty special colt at this point. (Overdriven) is 2-for-2 now and he's obviously a very mature 2-year-old, physically and mentally, precocious and gifted with some natural talent

She was conceding from six to 10 pounds to everyone in the race. But she's a strong filly and doing well

She was so sharp today. After getting us involved in the race early, she just did everything on her own. Every time you ask her, she gives you the answer

Todd Pletcher (born June 26, 1967, Dallas, Texas) is a leading American thoroughbred horse trainer. He has won four consecutive Eclipse Awards as outstanding Trainer of the Year, while topping the leader board in purse earnings in 2004, 2005, and 2006. His horse Super Saver won the 2010 Kentucky Derby, the first of his 24 horses entered in his career to win the Run for the Roses. He also won the 2007 Belmont Stakes with filly Rags to Riches.

FULL ARTICLE AT WIKIPEDIA.ORG
This article is licensed under the GNU Free Documentation License.
It uses material from the Wikipedia article "Todd Pletcher."