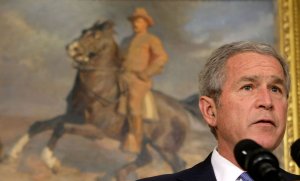 U.S. News // 9 months ago
Joe Biden sworn in as 46th U.S. president with VP Kamala Harris
Joseph R. Biden Jr. took the oath of office Wednesday on the West Front of the U.S. Capitol, becoming the 46th president of the United States. Kamala Harris was sworn in as the first Black woman vice president.

Top News // 11 months ago
The Almanac
On Oct. 31, 2014, SpaceShipTwo, Virgin Galactic's effort in spaceflight for tourists, crashed during a test flight, killing one of the pilots.

U.S. News // 1 year ago
Trump signs conservation bill that pays for parks' maintenance backlog
President Donald Trump signed the Great American Outdoors Act into law on Tuesday, a major bipartisan conservation effort that will secure lands and pay for a backlog of maintenance at National Parks.

U.S. News // 2 years ago
U.S. proposes rules that could cause faster destruction of national forests
U.S. environmental groups are sounding the alarm that one of the oldest environmental laws in the United States is being weakened on several fronts by the Trump administration.

Top News // 3 years ago
On This Day: USS Reuben James sunk by U-boat
On Oct. 31, 1941, more than a month before the United States entered World War II, a German submarine torpedoed and sunk a U.S. destroyer, the USS Reuben James.

World News // 4 years ago
On This Day: Britain returns Hong Kong to China
On July 1, 1997, Hong Kong was returned to China after 156 years as a British territory.

So rapid has been the rate of exhaustion of timber in the United States in the past, and so rapidly is the remainder being exhausted, that the country is unquestionably on the verge of a timber famine which will be felt in every household in the land

Theodore "Teddy" Roosevelt (October 27, 1858 – January 6, 1919; pronounced /ˈroʊzəvɛlt/ ROE-zə-velt) was the 26th President of the United States. He is well remembered for his energetic personality, range of interests and achievements, leadership of the Progressive Movement, model of masculinity, and his "cowboy" image. He was a leader of the Republican Party and founder of the short-lived Progressive ("Bull Moose") Party of 1912. Before becoming President (1901–1909) he held offices at the municipal, state, and federal level of government. Roosevelt's achievements as a naturalist, explorer, hunter, author, and soldier are as much a part of his fame as any office he held as a politician.

Born to a wealthy family, Roosevelt was an unhealthy child suffering from asthma who stayed at home studying natural history. In response to his physical weakness, he embraced a strenuous life. He attended Harvard, where he boxed and developed an interest in naval affairs. A year out of Harvard, in 1881 he ran for a seat in the state legislature. His first historical book, The Naval War of 1812, published in 1882, established his reputation as a serious historian. After a few years of living in the Badlands, Roosevelt returned to New York City, where he gained fame for fighting police corruption. He was effectively running the US Department of the Navy when the Spanish American War broke out; he resigned and led a small regiment in Cuba known as the Rough Riders, earning himself a nomination for the Medal of Honor. After the war, he returned to New York and was elected Governor; two years later he was nominated for and elected Vice President of the United States.

In 1901, President William McKinley was assassinated, and Roosevelt became president at the age of 42, taking office at the youngest age of any U.S. President in history. Roosevelt attempted to move the Republican Party in the direction of Progressivism, including trust busting and increased regulation of businesses. Roosevelt coined the phrase "Square Deal" to describe his domestic agenda, emphasizing that the average citizen would get a fair shake under his policies. As an outdoorsman and naturalist, he promoted the conservation movement. On the world stage, Roosevelt's policies were characterized by his slogan, "Speak softly and carry a big stick". Roosevelt was the force behind the completion of the Panama Canal; he sent out the Great White Fleet to display American power, and he negotiated an end to the Russo-Japanese War, for which he won the Nobel Peace Prize. Roosevelt is the first American to win the Nobel Peace Prize.

FULL ARTICLE AT WIKIPEDIA.ORG
This article is licensed under the GNU Free Documentation License.
It uses material from the Wikipedia article "Teddy Roosevelt."