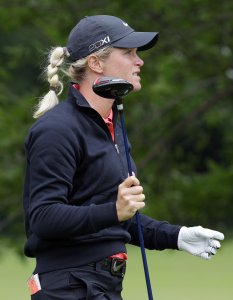 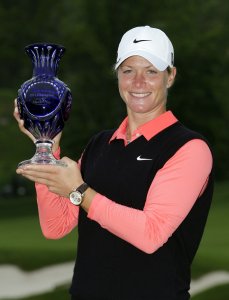 Golf // 4 years ago
This week in golf: who is playing, how to watch, full schedule
Here is this week's schedule of golf action, headlined by the 2017 Wyndham Championship at Sedgefield Country Club.

Golf // 5 years ago
This week in golf: who is playing, how to watch, full schedule
Here is this week's slate of golf action, highlighted by Jordan Spieth's quest for a Grand Slam at the 99th PGA Championship.

Sports News // 5 years ago
So Yeon Ryu records blistering 61 in Arkansas
So Yeon Ryu shot a tournament-record 10-under-par 61 on Saturday to seize a five-stroke lead heading into the final round of the Walmart NW Arkansas Championship in Rogers, Ark.

Golf // 5 years ago
Amy Yang rolls to victory at LPGA Thailand
South Korean Amy Yang closed with a 4-under 68 on Sunday to win by five strokes at the LPGA Thailand in Chonburi, Thailand.

Golf // 6 years ago
Golf news: Nike exiting equipment means Tiger Woods will have new clubs
Nike, which has huge endorsement deals with Tiger Woods and Rory McIlroy among others, dropped a bombshell when it announced that it is getting out of the golf equipment business.

We are kind of getting used to it out here

I'm just trying to play with my feel and first instinct

Suzann Pettersen (born 7 April 1981) is a Norwegian professional golfer. She plays mainly on the U.S.-based LPGA Tour, and is also a member of the Ladies European Tour. Her career best world ranking is second. She has held that position at several times, most recently beginning 22 August 2011.

Pettersen was born in Oslo, Norway, and was a successful amateur golfer. She is a five-time Norwegian Amateur Champion (1996–2000), and won the British Girls Championship in 1999. She represented Norway in the Espirito Santo Trophy World Amateur Team Championship in 1998 and 2000, becoming World Amateur Champion in her second appearance. She also represented Europe in the 1997 and 1999 Junior Ryder Cup Matches.

Pettersen turned professional in September 2000 at age 19 and gained her Ladies European Tour card with an 11th place finish at the 2001 LET Qualifying School. In her 2001 rookie season, she played in ten events without missing a cut. In her second start as a professional, Pettersen won the Open de France Dames in a playoff over Becky Morgan. She finished second on the Order of Merit and was named LET Rookie of the Year.

FULL ARTICLE AT WIKIPEDIA.ORG
This article is licensed under the GNU Free Documentation License.
It uses material from the Wikipedia article "Suzann Pettersen."