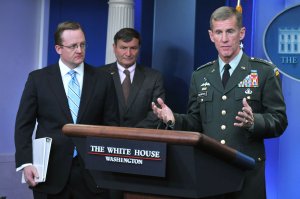 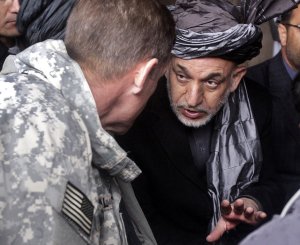 Top News // 3 years ago
On This Day: Tolkien publishes 'The Hobbit'
On Sept. 21, 1937, J.R.R. Tolkien published "The Hobbit," a novel about a fantastical journey to reclaim treasure stolen by a fire-breathing dragon.

Opinion // 4 years ago
Harlan Ullman: It's time to require strict regulation of gun ownership
With a huge army and capable police forces, one might conclude the Second Amendment and dependence on militias have become obsolete.

U.S. News // 4 years ago
Mitt Romney leading 'stop Trump' group seeking to draft third candidate
Mitt Romney is leading a group of conservatives trying to draft a third-party presidential candidate who would run in an effort to stop Donald Trump.
U.S. News // 7 years ago
Journalist Michael Hastings killed in car crash
Award-winning war correspondent Michael Hastings was killed in a fiery car crash Tuesday in Los Angeles, his employer said. He was 33.
U.S. News // 7 years ago
McChrystal: 'I wanted to keep my job'
Retired Gen. Stanley McChrystal said Monday he wanted to keep his job even after a magazine article cast him and his staff in a negative light.
U.S. News // 7 years ago
McChrystal takes responsibility in memoir
Retired U.S. Army Gen. Stanley McChrystal, in his memoir, says he was surprised by the tone of the Rolling Stone article that cost him his job in Afghanistan.
Outside View // 7 years ago
Outside View: The commander in chief
U.S. commanders in chief need to hold subordinates accountable for answering the question of “What next?” as a critical step in ensuring strategic success.
U.S. News // 7 years ago
Petraeus quits CIA over affair
CIA Director David Petraeus resigned Friday, citing an extramarital affair, and President Barack Obama named Michael Morell acting director of the agency.
Special Reports // 9 years ago
McChrystal talks on leadership
Retired U.S. Army Gen. Stanley McChrystal offers leadership lessons that focused on the need for teamwork.

If it wasn't for the transparency and the daylight the media forces, I'm not sure where any of our institutions would go

As a soldier, my personal feeling is that there's been enough fighting

I have made it clear to our forces that we are here to protect the Afghan people, and inadvertently killing or injuring civilians undermines their trust and confidence in our mission. We will redouble our efforts to regain that trust

We're not at the end of the military phase, but we're clearly approaching that

Commanders have a moral imperative to ensure that we provide every possible element of support to our troopers when they get into a tight spot, and I will ensure that we meet that imperative

Stanley Allen McChrystal (born August 14, 1954) is a retired four-star general in the United States Army. His last assignment was as Commander, International Security Assistance Force (ISAF) and Commander, U.S. Forces Afghanistan (USFOR-A). He previously served as Director, Joint Staff from August 2008 to June 2009 and as Commander, Joint Special Operations Command from 2003 to 2008, where he was credited with the death of Abu Musab al-Zarqawi, leader of Al-Qaeda in Iraq, but also criticized for his alleged role in the cover-up of the Pat Tillman friendly fire incident. McChrystal was reportedly known for saying and thinking what other military leaders were afraid to, one of the reasons cited for his appointment to lead all forces in Afghanistan, a post he held from June 15, 2009, to June 23, 2010.

Following unflattering remarks about Vice President Joe Biden and other administration officials attributed to McChrystal and his aides in a Rolling Stone article, McChrystal was recalled to Washington, D.C., where President Barack Obama accepted his resignation of his commands in Afghanistan. His command of the International Security Assistance Force in Afghanistan was immediately assumed by the deputy commander, British General Sir Nicholas "Nick" Parker, pending the confirmation of a replacement. Obama named General David Petraeus as McChrystal's replacement; Petraeus was confirmed by the Senate and officially assumed command on June 30. Days after being relieved of his duties in Afghanistan, McChrystal announced his retirement.

FULL ARTICLE AT WIKIPEDIA.ORG
This article is licensed under the GNU Free Documentation License.
It uses material from the Wikipedia article "Stanley A. McChrystal."
Back to Article
/