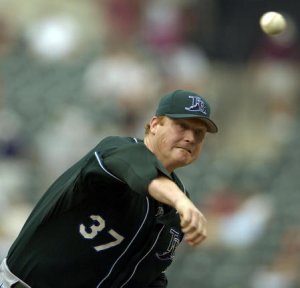 Michael Seth McClung (born February 7, 1981, in Lewisburg, West Virginia), nicknamed Big Red, is a pitcher for the Milwaukee Brewers. In his career, he has pitched as a starting pitcher and as a relief pitcher.

His father, Mike, was an all-state high school football player. His brother, Marcus, is a former football player at Virginia Tech and the Canadian Football League, his brother Shawn played extreme sports, and his younger brother Sam was a lineman at Tusculum College in Greeneville, Tennessee.

McClung began the 2006 season with the Tampa Bay Devil Rays as a starting pitcher, was sent later that year to the minor leagues, and was converted to be a closer.

FULL ARTICLE AT WIKIPEDIA.ORG
This article is licensed under the GNU Free Documentation License.
It uses material from the Wikipedia article "Seth McClung."
Back to Article
/