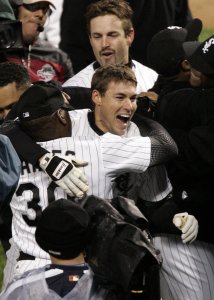 Podsednik was drafted out of West High School in the 3rd round, 85th overall, in the 1994 Major League Baseball Draft by the Texas Rangers. He began his professional career with the Gulf Coast Rangers in 1994. The Rangers traded him (along with Wilson Heredia) to the Florida Marlins for pitcher Bobby Witt on October 8, 1995. He spent the next two seasons playing for the Marlins class-A affiliates.

On December 15, 1997 he returned to the Rangers in the minor league portion of the Rule V Draft. He was promoted to the Double-A Tulsa Drillers in 1998. He remained with Tulsa through the 2000 season when he was granted free agency.

FULL ARTICLE AT WIKIPEDIA.ORG
This article is licensed under the GNU Free Documentation License.
It uses material from the Wikipedia article "Scott Podsednik."
Back to Article
/