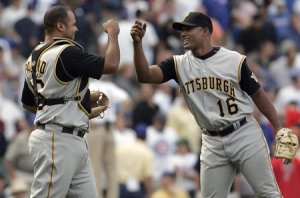 I think everyone knew that it wasn't on purpose, just a ball that got away

Torres is best-known for starting the last game of the 1993 season for the Giants, when he gave up three runs over 3⅓ innings to the arch-rival Los Angeles Dodgers. The Giants, winners of 103 games that season, finished in second place behind the 104-win Atlanta Braves, at that time in the National League West division. Though he was then in his first month as a Major Leaguer, some Giants fans blamed Torres for ruining a promising season and apparently never forgave him; he is still heckled when he returns to San Francisco as an opposing player. Said Torres: "They come to the park and they pay my salary, so they have the right to heckle me. If that's going to make them feel better and get over what happened in 1993, OK. But it's time to move on.... I don't think I was treated fairly by some of my teammates. And I still don't think I'm being treated fairly by the fans."

The Giants traded Torres to the Seattle Mariners in mid-1995 for Shawn Estes and Wilson Delgado. After two years with the Mariners, he was claimed off waivers by the Montreal Expos in mid-1997. After ending the 1997 season with a 9.82 ERA, Torres retired and returned to the Dominican Republic to coach for the Expos' Dominican Summer League team.

FULL ARTICLE AT WIKIPEDIA.ORG
This article is licensed under the GNU Free Documentation License.
It uses material from the Wikipedia article "Salomon Torres."
Back to Article
/