Sports News // 4 years ago
Memphis Grizzlies bear down against Denver Nuggets
MEMPHIS, Tenn. -- A few weeks ago, the ground-and-pound Memphis Grizzlies started to move more toward the NBA trend of space and pace.

Sports News // 4 years ago
Wizards go small, come up with big win
WASHINGTON -- Small ball is all the rage in the NBA these days. By necessity over design, the Washington Wizards took the modern look to the extreme against the Phoenix Suns and earned a big win. 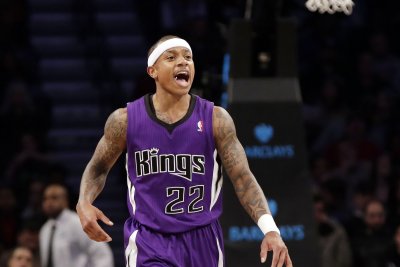 Ryan Kenwood Hollins (born October 10, 1984) is an American professional basketball player who is currently a member of the Cleveland Cavaliers of the NBA. He is a 7-foot center who played collegiately for the UCLA Bruins.

Hollins attended John Muir High School in Pasadena, California. He had signed with St. Louis University, but was allowed to withdraw his letter of intent after St. Louis head coach Lorenzo Romar left to become the head coach at the University of Washington.

Hollins played significant minutes all four years of his career. He had career averages of 5.5 points and 4 rebounds. He had a then career-high 11 points, 11 rebounds and seven blocks in a career-high 34 minutes against Oregon on January 30, 2003, and bettered his career high with 21 points in a loss to USC on January 28, 2004. He was named the Oakland Regional's Most Outstanding Player after registering 14 points and 9 rebounds in a 50–45 victory against the Memphis Tigers.

FULL ARTICLE AT WIKIPEDIA.ORG
This article is licensed under the GNU Free Documentation License.
It uses material from the Wikipedia article "Ryan Hollins."
Back to Article
/