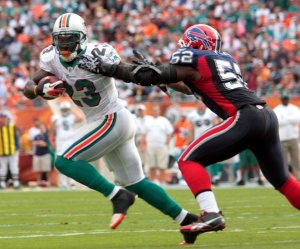 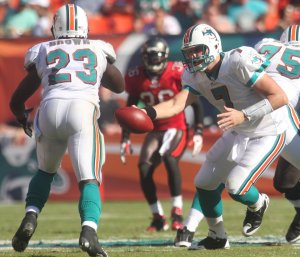 After I saw Carnell go down, I knew someone was going to have to step up and have a big game

After I saw Carnell go down, I knew someone was going to have to step up and have a big game

Ronnie Gene Brown (born December 12, 1981) is an American football running back for the Philadelphia Eagles of the National Football League. He was drafted by the Miami Dolphins second overall in the 2005 NFL Draft. He played college football at Auburn.

Brown attended Cartersville High School in Georgia, where he was a three-year starter and rushed for 4,936 yards, 12 touchdowns. In his senior year, he earned the Georgia Class 2A Player of the Year award when he gained 1,931 yards on 206 carries and scored 25 touchdowns. That year, 1999, Brown led Cartersville to a state championship over Hart County - their first since 1991. During his high school career, he was selected to the PrepStar All-America team. He also played free safety and had three interceptions in his senior year. Brown was also an accomplished baseball player and was drafted by the Seattle Mariners out of high school.

Brown moved on to Auburn University to play NCAA football and major in communications. He teamed up with speed running back Carnell Williams to create a premier running threat of speed and power. He Redshirted after playing in the first two games of the 2000 season as he only gained 10 yards on six carries. In 2001, he played in 10 games and ranked third on the team with 330 yards on 84 carries and two touchdowns while catching seven passes for 109 yards.

FULL ARTICLE AT WIKIPEDIA.ORG
This article is licensed under the GNU Free Documentation License.
It uses material from the Wikipedia article "Ronnie Brown."
Back to Article
/