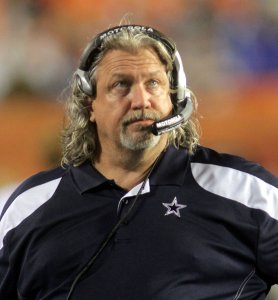 NFL // 4 years ago
Buffalo Bills officially name EJ Manuel to start at quarterback
ORCHARD PARK, N.Y. -- Interim head coach Anthony Lynn of the Buffalo Bills made it official Wednesday when he announced that EJ Manuel would start the season finale in New York against the Jets over Tyrod Taylor.

NFL // 4 years ago
New England Patriots at Buffalo Bills: prediction, preview, pick to win
113th regular-season meeting. Patriots lead the all-time series, 68-43-1. The battles date back to the original AFL days, but of late New England has dominated the Bills as much as any opponent in the Brady/Belichick era.

Rob Ryan (born December 13, 1962 in Ardmore, Oklahoma) currently serves as Defensive Coordinator for the Cleveland Browns. He is the son of former defensive coordinator and head coach Buddy Ryan and the twin brother of current head coach of the New York Jets, Rex Ryan.

Ryan was a graduate assistant at Western Kentucky in 1987 and at Ohio State in 1988. Ryan then spent 5 seasons at Tennessee State, where he coached running backs (1989–91), wide receivers(1992) and the defensive line (1993). He served as defensive coordinator at Hutchinson Community College in 1996, where they led the nation in total defense (228 yards per game) and in sacks (56). His defense also set a national record by forcing 49 turnovers. Ryan played three seasons as an outside linebacker at Southwestern Oklahoma State. Ryan originally entered the NFL coaching ranks in 1994 as defensive backs coach on his father staff at Arizona Cardinals. He also coached Cardinals cornerbacks and safeties in 1995. With Ryan as his position coach, cornerback Aeneas Williams earned two trips to the Pro Bowl in 1994 and 1995. In 1995, the Cardinals led the NFL with 32 interceptions and 42 total takeaways. The 1994 Cardinals ranked second in the NFL total defense, second in run defense and third in pass defense. From 1997–99, Ryan was Oklahoma State defensive coordinator, where the Cowboys defense continually ranked among the best in the nation, also he was named Coordinator of the Year by The Sporting News in 1997.

In 1999, they were ranked 10th in the nation in total defense. In 1998, they were second in the nation with 41 sacks. In his first season at Oklahoma State, the Cowboys defense finished among the nation top-20 in turnover margin, rushing defense, scoring defense and total defense, allowing just 302.7 yards per game. It was an over 100-yard improvement per game from the year before and helped the Cowboys produce an 8–4 mark and an Alamo Bowl berth.

FULL ARTICLE AT WIKIPEDIA.ORG
This article is licensed under the GNU Free Documentation License.
It uses material from the Wikipedia article "Rob Ryan."
Back to Article
/