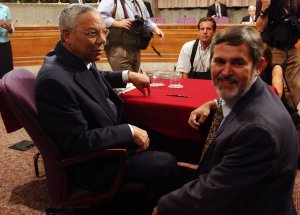 Health News // 1 year ago
Lab experiments show how masks could protect against COVID-19
Scientists studying the SARS-CoV-2 coronavirus -- which causes COVID-19 -- believe they've discovered why face masks might help limit transmission of the virus.
Top News // 1 decade ago
Captured fugitive appears in Va. court
A judge in Chesapeake, Va., says felony charges will be considered by a grand jury for Richard Boucher, who was captured recently after 27 years on the run.
Top News // 1 decade ago
Prison escapee arrested 27 years later
A Virginia prison fugitive has been apprehended in Georgia after 27 years on the run, officials said Wednesday.
Top News // 1 decade ago
India accuses Pakistani agencies in attack
India's prime minister said unnamed Pakistani agencies supported militants who attacked Mumbai, comments Pakistani officials call "unfortunate."
Top News // 1 decade ago
U.S. officials in Pakistan to talk terror
U.S. Assistant Secretary of State Richard Boucher was in Pakistan Monday to discuss terrorism issues after the Mumbai, India, attacks, a senior diplomat said.
Top News // 1 decade ago
Petraeus arrives in Pakistan for meetings
Gen. David Petraeus, the head of the U.S. Central Command, has arrived in Pakistan to meet with government and military officials.
Energy News // 1 decade ago
Analysis: Afghanistan's untapped energy riches
Next month the U.S.-led campaign in Afghanistan enters its eighth year. Despite the country's substantial energy and mineralogical reserves, little has been done to develop them, which might have provided an increased standard of living for the population. Foreign aid has largely bypassed the majority of the country's inhabitants, most of whom live on less than $2 a day. As a result, the rising insurgency has been able to exploit the gap between Western rhetoric and actual aid to increase its influence.
Health News // 1 decade ago
Dry airways may be key to lung disease
German and U.S. researchers suggest dry airways may be the culprit in a number of lung diseases.
Top News // 1 decade ago
U.S. envoys arrive in Pakistan
Nawaz Sharif, a key figure in Pakistan's new coalition government, says the country should not become a killing field while fighting extremism.
Top News // 1 decade ago
Boucher to review U.S.-India nuclear deal
U.S. Assistant Secretary of State Richard Boucher will review the status of the U.S.-India civil nuclear deal on his India visit, a report said Sunday.

We want to see smooth and safe elections go forward

We've stuck with talking to the government about the security situation, about the situation as regards democracy and maintaining the democracy in Bolivia

We are concerned about the reports and about this case

For the similarly named Congressman from Virginia, see Rick Boucher.

Richard A. Boucher (born 1951 in Bethesda, Maryland) was sworn in as the Assistant Secretary of State for South and Central Asian Affairs on February 21, 2006. The Bureau of South Asian Affairs was expanded to include the nations of Central Asia shortly before his confirmation.

FULL ARTICLE AT WIKIPEDIA.ORG
This article is licensed under the GNU Free Documentation License.
It uses material from the Wikipedia article "Richard Boucher."
Back to Article
/