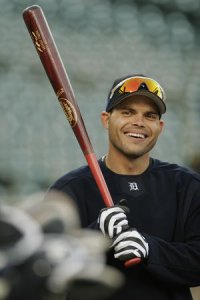 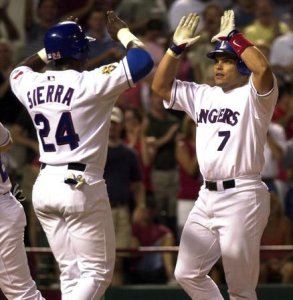 Iván Rodríguez Torres (born November 30, 1971 in Manatí, Puerto Rico), commonly nicknamed "Pudge" and "I-Rod", is a Major League Baseball catcher for the Houston Astros. In his career, he has played for the Texas Rangers, Florida Marlins, Detroit Tigers, New York Yankees, and Houston Astros. He is ranked as one of the greatest defensive catchers in the history of the major leagues. Rodríguez was awarded the American League (AL) Most Valuable Player Award in 1999.

Rodríguez won the World Series with the Marlins in 2003, and also played in the 2006 World Series while with the Tigers. On June 17, 2009, Rodriguez set a MLB record by catching his 2,227th game, passing Carlton Fisk.

Iván Rodríguez was born in Manatí, Puerto Rico, and raised in Vega Baja. His father, Juan, worked for a U.S.-based construction company, and his mother, Eva Torres, was an elementary school teacher. Iván's first job involved delivering flyers in the shopping malls in Puerto Rico. He learned baseball at an early age, his biggest rival being Juan González, who he often played against in his youth. As a Little League player, he moved from pitcher to catcher because his father, who was also his coach, thought he was throwing too hard and scaring opposing players with his pitches. Rodríguez attended Lino Padron Rivera High School, where he was discovered by scout Luis Rosa. Rosa reported that "he showed leadership at 16 that I’d seen in few kids. He knew where he was going." Rodríguez signed a contract with the Texas Rangers in July 1988, at the age of 16, and began his professional baseball career.

FULL ARTICLE AT WIKIPEDIA.ORG
This article is licensed under the GNU Free Documentation License.
It uses material from the Wikipedia article "Pudge Rodriguez."
Back to Article
/