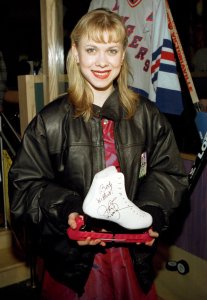 Top News // 3 years ago
The Almanac
On Nov. 16, 1933, the United States established diplomatic relations with the Soviet Union.

Baiul was born in Dnepropetrovsk, Ukrainian SSR, USSR. Her parents divorced when she was two years old and she was raised by her mother, Marina. Marina died of ovarian cancer when Oksana was thirteen; Oksana had already lost her maternal grandparents and had no other relatives. Her coach looked after her for a while, but when he emigrated to Canada, she was on her own and sleeping on a cot at her hometown ice rink. She was eventually taken in by Galina Zmievskaya, the top-ranked figure-skating coach in Odessa, sharing a small bedroom in her new mentor's crowded three-room apartment with one of the woman's own daughters. Zmievskaya's pupil and son-in-law, Olympic figure-skating champion Viktor Petrenko, helped cover Baiul's expenses.

Baiul won the 1993 World Figure Skating Championship in her first senior competitive season at the age of 15. She then won the gold medal at the 1994 Winter Olympics, defeating Nancy Kerrigan of the United States. Baiul had nearly missed competing in the free skate altogether, having been injured after a collision with Tanja Szewczenko of Germany during a warm-up session following the ladies' short program. She received two Olympic-approved pain-killing injections of anesthetics in her lower back and shoulder which enabled her to perform and complete her free skate.

FULL ARTICLE AT WIKIPEDIA.ORG
This article is licensed under the GNU Free Documentation License.
It uses material from the Wikipedia article "Oksana Baiul."
Back to Article
/