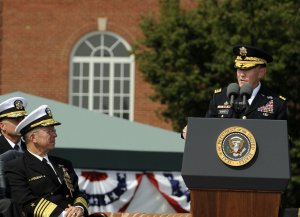 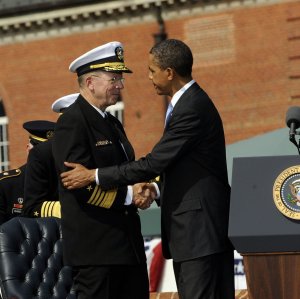 U.S. News // 6 years ago
Full text of Hillary Clinton's statement to Benghazi committee
Former Secretary of State Hillary Clinton testified for more than 11 hours Thursday before the House Select Committee on Benghazi.
World News // 6 years ago
U.S. threatens withholding aid to Pakistan
The United States will withhold $300 million in military aid from Pakistan unless more is done to stop Haqqani militants targeting Afghan and U.S. troops.
Outside View // 7 years ago
Outside View: Bob Gates' 'Duty'
Last week's release of Bob Gates' "Duty: Memoirs of a Secretary at War" was preceded by his publisher's brilliant public relations campaign hyping the book with tantalizingly provocative excerpts.
U.S. News // 8 years ago
Gates offers critical take on Obama's Afghan policy
In a forthcoming memoir, former U.S. Defense Secretary Robert Gates charges President Barack Obama with failing to trust his top military leaders.
U.S. News // 8 years ago
U.S. House committee quarrels over Benghazi 'accountability'
House Republicans and Democrats argued the meaning of accountability Wednesday in a hearing on the fatal terrorist attack on a U.S. diplomatic mission in Libya.
Business News // 8 years ago
Retired Adm. Mullen to become Sprint Nextel security chief
Sprint Nextel Corp. said Friday retired U.S. Adm. Mike Mullen will join its board of directors and serve as the telecommunication company's security director.
U.S. News // 8 years ago
Issa seeks deposition of Benghazi panel chairman
The U.S. House Oversight Committee chairman said he would subpoena the head of the panel that reviewed the terrorist attack on the consulate in Benghazi, Libya.
U.S. News // 8 years ago
Pickering defends Benghazi report
Thomas Pickering, the co-chair of the Benghazi Accountability Review Board, said that criticisms of his report were unfounded and inaccurate.
U.S. News // 8 years ago
State Department deputy recalls Benghazi attack for House committee
The U.S. deputy chief of mission in Libya fought for composure as he recalled the attack on the U.S. Consulate in Benghazi to a House panel Wednesday.

It does speak to me about the need for us to redouble our efforts ... in terms of dealing with the stress, dealing with the whole issue of those kinds of things. And it also speaks to the issue of multiple deployments, increasing dwell time, all those things that we're focused on to try to ... relieve that stress

Why have we come to rely on contractors to provide combat or combat-related security training? ... Are we comfortable with this practice

I think we need to be very clear about acknowledging that focus on Iraq, and acknowledging what we can do, what we've done and also what we haven't been able to do

How I approach this job is I really try to keep my focus on balance, given that uncertainty and that unpredictability

Michael Glenn "Mike" Mullen (born October 4, 1946) is a United States Navy admiral who currently serves as the 17th Chairman of the Joint Chiefs of Staff (CJCS). Mullen previously served as the Navy's 28th Chief of Naval Operations from July 22, 2005 to September 29, 2007. He is only the third naval officer in Navy history to be appointed to four different four-star assignments; the others being the Commander, U.S. Naval Forces Europe and Commander, Allied Joint Force Command Naples from October 2004 to May 2005, and as the 32nd Vice Chief of Naval Operations from August 2003 to August 2004. As the CJCS, Mullen is the highest ranking officer in the United States Armed Forces. Mullen assumed his current assignment on October 1, 2007.

The son of a Hollywood press agent and his wife, who worked as an assistant to Jimmy Durante, Mullen was born in Los Angeles, California, and attended St. Charles Borromeo Church (North Hollywood) grade school. He graduated from Notre Dame High School (Sherman Oaks) in 1964, and from the United States Naval Academy in 1968. Mullen has served in a wide range of assignments at sea and ashore, in Allied, Joint and Navy positions, overseas and in both the Atlantic and the Pacific Fleets.

FULL ARTICLE AT WIKIPEDIA.ORG
This article is licensed under the GNU Free Documentation License.
It uses material from the Wikipedia article "Mike Mullen."