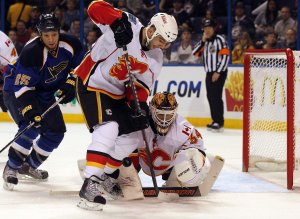 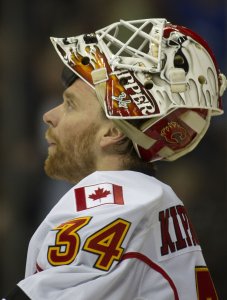 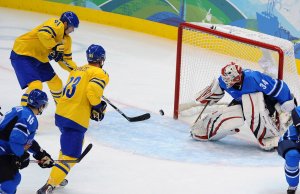 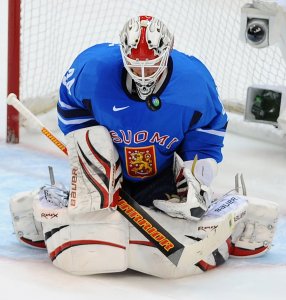 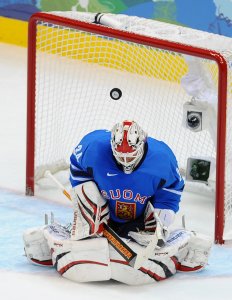 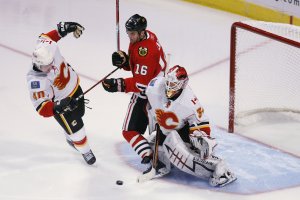 Miikka Sakari Kiprusoff (Finnish pronunciation: ; born October 26, 1976) is a Finnish professional ice hockey goaltender currently playing for the Calgary Flames of the National Hockey League (NHL). He was selected in the fifth round, 116th overall by the San Jose Sharks in the 1995 NHL Entry Draft. He has also played for TPS of the Finnish SM-liiga as well as AIK and Timrå IK of the Swedish Elitserien. He has represented Finland several times on the international stage, earning silver medals at the World Ice Hockey Championships in 1999 and 2001, as well as leading the Finns to a surprise second place finish at the 2004 World Cup of Hockey. He also helped the Finnish national hockey team win the bronze medal at the 2010 Winter Olympics.

Kiprusoff began his professional career with TPS in 1994, and was named the best goaltender and best player of the playoffs in 1999 as he led them to the SM-liiga championship. He moved to North America in 1999, and after two all-star seasons in the American Hockey League, made his NHL debut with the Sharks where he served primarily as a backup. A trade to Calgary in 2003–04 brought Kiprusoff into a starting role and he set a modern NHL record for lowest goals against average at 1.69 as he helped the Flames reach the 2004 Stanley Cup Final. He won the Vezina Trophy as the best goaltender in the NHL in 2006 along with the William M. Jennings Trophy for giving up the fewest goals in the league. He played in his first NHL All-Star Game in 2007 and is the Flames franchise record holder in shutouts.

Kiprusoff was sponsored by his hometown team, TPS Turku, playing two seasons in the Finnish junior league for them between 1993 and 1995. He was selected by the San Jose Sharks in the fifth round, 116th overall, at the 1995 NHL Entry Draft. He made his professional début in 1994–95, and won three of four games played for TPS. After playing 12 games for TPS in 1995–96, he moved to AIK of the Swedish Elitserien, playing two seasons as their top goaltender before returning to TPS in 1998–99. He dominated the SM-liiga that year, finishing the season with a win-loss-tie record of 26–6–6 and a goals against average (GAA) of 1.85, and led TPS to the Finnish championship. For his efforts, he was named the winner of the Urpo Ylönen trophy as the best goaltender in 1998–99 and the Jari Kurri trophy as the best player of the playoffs.

FULL ARTICLE AT WIKIPEDIA.ORG
This article is licensed under the GNU Free Documentation License.
It uses material from the Wikipedia article "Miikka Kiprusoff."