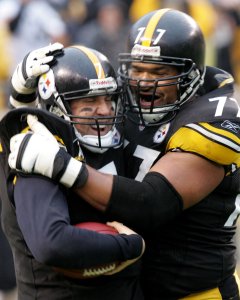 Marvel Amos Smith (born August 6, 1978 in Oakland, California) is an American football offensive tackle for the San Francisco 49ers of the National Football League. He was drafted by the Pittsburgh Steelers in the second round of the 2000 NFL Draft. He played college football at Arizona State.

Smith attended Skyline High School in Oakland, California and was a student and a letterman in football. In football, he was a two-time All-City selection. Earned first-team All-Bay Area as well as second-team All-East Bay honors his senior year, he was voted Skyline Offensive Player of the Year and named West County Times "Cream of the Crop" in 1995 ranked as the eighth-best college prospect in the Bay Area, earned Prep All-Star first-team honors and became the school's first lineman to receive a Division I-A scholarship.

FULL ARTICLE AT WIKIPEDIA.ORG
This article is licensed under the GNU Free Documentation License.
It uses material from the Wikipedia article "Marvel Smith."
Back to Article
/