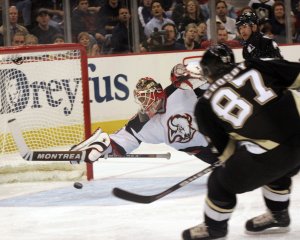 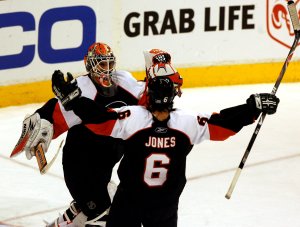 Biron started his hockey career on the Beauport Harfangs of the Quebec Major Junior Hockey League (QMJHL). He was drafted by the Buffalo Sabres in the first round of the 1995 NHL Entry Draft, 16th overall. He got his first NHL start for the Buffalo Sabres in the 1995–96 season. After posting a 5.04 goals against average, with zero wins and two losses, he was sent back to the QMJHL to improve. After the 2000–01 season, he was a consistent goaltender for the Sabres, as his play in the crease improved drastically.

Biron, along with Rob Ray and Dominik Hašek, was one of the three Sabres who, in three consecutive years, the NHL made a specific rule against. The "Biron rule" was in regards to which number players could wear on their jerseys, the league limiting it to whole numbers between 1 and 99 (later limited to numbers between 1 and 98 because of the league-wide retirement of number 99 for Wayne Gretzky). Biron was the only NHL player affected as only he wore "00". Upon his return to the NHL three seasons later, Biron switched to number 43, a number he has worn ever since. Biron has always been a fan favorite in Buffalo.

FULL ARTICLE AT WIKIPEDIA.ORG
This article is licensed under the GNU Free Documentation License.
It uses material from the Wikipedia article "Martin Biron."
Back to Article
/