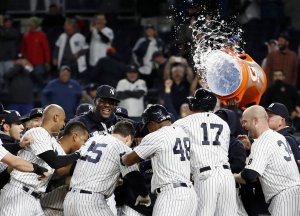 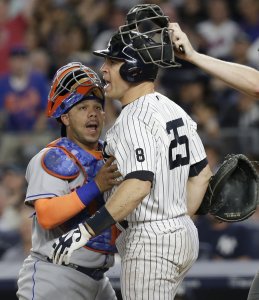 Top News // 5 years ago
The Almanac
In 1945, Allied troops liberated Buchenwald concentration camp in Germany. French writer Marcel Conversy would describe his 15 months there as a "living hell."

MLB // 5 years ago
New York Yankees' Didi Gregorius (shoulder) likely to miss April
One of the biggest fears of a Major League Baseball team is having one of its players injured during the World Baseball Classic.

Sports News // 5 years ago
New York Yankees eliminated during victory over Boston Red Sox
NEW YORK -- There was some personal satisfaction for CC Sabathia being able to finish off the season with a victory and an ovation from fans at Yankee Stadium.

Mark Charles Teixeira (pronounced /teɪˈʃɛrə/ tay-sherr-ə; born April 11, 1980, in Annapolis, Maryland), nicknamed "Tex" is an American Major League Baseball player for the New York Yankees. Mostly a first baseman, he has also played third base and in the outfield. He played college baseball at Georgia Tech, where in 2001 he won the Dick Howser Trophy as the national collegiate baseball player of the year.

Teixeira was drafted in 2001 by the Texas Rangers, and made his MLB debut for them in 2003. In mid-2007 he was traded to the Atlanta Braves, and traded again in mid-2008 to the Los Angeles Angels of Anaheim. In December 2008, he agreed to a contract with the New York Yankees. Teixeira has won four Gold Glove Awards and three Silver Slugger Awards. Teixeira also holds the all-time major league record for most games with a home run from both sides of the plate, with 12.

Teixeira grew up in Severna Park, Maryland, and attended Mount Saint Joseph High School in Baltimore, Maryland, where he played for the school's varsity baseball team. Teixeira is a Portuguese American. He also has roots in the South American country of British Guiana (now Guyana), the country from which his grandfather migrated as a young man.

FULL ARTICLE AT WIKIPEDIA.ORG
This article is licensed under the GNU Free Documentation License.
It uses material from the Wikipedia article "Mark Teixeira."