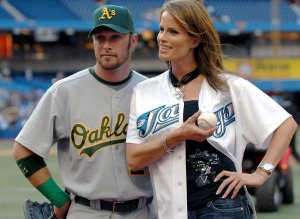 Mark Steven Kotsay (born December 2, 1975 in Whittier, California) is a Major League Baseball player and an outfielder for the Milwaukee Brewers.

A native of Whittier, California, Kotsay was selected by the Florida Marlins the 9th pick of the Amateur Draft in 1996 out of Cal State Fullerton. Kotsay spent the summer of 1994 playing for the Bourne Braves of the Cape Cod Baseball League. In 1995, Kotsay won the Golden Spikes Award and was the Most Outstanding Player of the College World Series, as CS-Fullerton won its third Series championship. In addition to being an outfielder, Kotsay was a closer in college; he pitched the final five outs to clinch his team's CWS title.

Kotsay appeared in 14 games for the Florida Marlins in 1997 before taking over as the team's center fielder in 1998. He was moved to right field after Gary Sheffield was traded, a position better suited for the strong throwing arm which Kotsay regularly showed off. As a rookie, he led all National League outfielders with 20 assists, and led them again in his second year with the same number. In 2000, he led all right fielders with 13 assists. At the plate, Kotsay was an average hitter during these years, hitting around .280 with occasional power and the occasional stolen base. Kotsay was traded in 2001, barely a week before Opening Day, to the San Diego Padres as part of a deal for Matt Clement and Eric Owens. Moved back to center field, Kotsay improved his hitting, but he recorded only four outfield assists. This can be largely attributed to the fact that few chose to run on Kotsay. Over the next two seasons, however, Kotsay was defensively back on form, leading all National League center fielders in that category. After his batting average slipped to .266 in 2003, Kotsay was traded to the Oakland Athletics for Terrence Long and Ramón Hernández.

FULL ARTICLE AT WIKIPEDIA.ORG
This article is licensed under the GNU Free Documentation License.
It uses material from the Wikipedia article "Mark Kotsay."