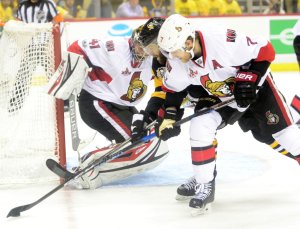 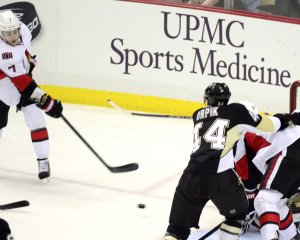 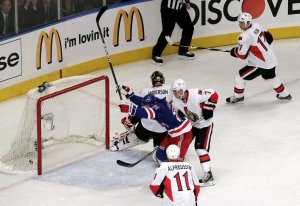 NFL // 2 years ago
Titans, Predators offer assistance in Nashville tornado recovery
The Tennessee Titans and Nashville Predators are working to help their community recover after a tornado swept through Nashville and surrounding areas of Middle Tennessee.

NHL // 3 years ago
Nashville Predators close out homestand against Buffalo Sabres
If Saturday night was any indication, Eeli Tolvanen is ready for his second try at the NHL.

NHL // 3 years ago
Predators' Pekka Rinne might return to face Oilers
Pekka Rinne could come off injured reserve Saturday, just in time for a date with the team he loves to face.

NHL // 5 years ago
Pittsburgh Penguins even series with 3-2 win over Ottawa Senators
Olli Maatta and Brian Dumoulin scored their first goals of the playoffs as the Penguins built a lead and then hung on to defeat the Ottawa Senators 3-2.

Kyle Turris (born August 14, 1989) is a Canadian professional ice hockey centre currently playing for the Phoenix Coyotes of the National Hockey League. He was drafted third overall in the 2007 NHL Entry Draft.

As a 16-year-old in the British Columbia Hockey League, Turris scored 72 points in 57 games for the Burnaby Express in 2005–06 and was awarded the Bruce Allison Memorial Trophy for the Coastal Conference as rookie of the year. The following year, he finished second in league scoring with 121 points and was named the Coastal Conference's Most Valuable Player. Adding 26 points in 14 games, Turris led the Express to the BCHL championship, advancing to the 2006 Royal Bank Cup, Canada's national Junior A championship. He would score a hat trick in the final game against the Yorkton Terriers of the SJHL and led the tournament in scoring as the Express won the championship.

Named the 2007 Canadian Junior A Player of the Year, he was ranked first overall among North American skaters by Central Scouting and third among all skaters by International Scouting Services for the upcoming draft. In the subsequent 2007 NHL Entry Draft, he was drafted third overall by the Phoenix Coyotes, behind Patrick Kane and James van Riemsdyk. Turris stands as the highest ever drafted Tier II Junior "A" player since the level's inception by the Canadian Amateur Hockey Association in 1970.

FULL ARTICLE AT WIKIPEDIA.ORG
This article is licensed under the GNU Free Documentation License.
It uses material from the Wikipedia article "Kyle Turris."