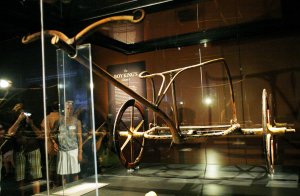 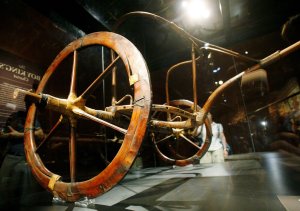 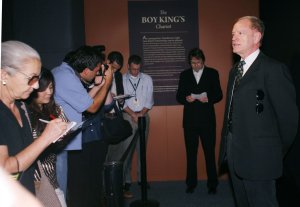 Top News // 4 years ago
The Almanac
On Nov. 26, 1922, in Egypt's Valley of the Kings, British archaeologists Howard Carter and George Carnarvon became the first humans to enter King Tutankhamen's treasure-laden tomb in more than 3,000 years.

World News // 5 years ago
Museum staff in Egypt facing charges over failed King Tut beard job
Eight employees of Cairo's Egyptian Museum will be charged with negligence over the mishandled reattachment of the beard of King Tutankhamun's mask.

World News // 5 years ago
King Tut tomb scans show '90 percent' chance of hidden room
The Egyptian Ministry of Antiquities said it is 90 percent sure there is a hidden chamber in King Tutankhamen's tomb.

Science News // 5 years ago
Infrared scans point to hidden chamber in King Tut's tomb
Infrared thermography indicates a hidden chamber in the tomb of King Tutankhamen, the Egyptian Ministry of Antiquities said.
TV // 7 years ago
Spike TV to air 6-hour King Tut miniseries
"Tut," a six-hour miniseries about ancient Egypt’s King Tutankhamun, is to be shot in Morocco and Canada this fall and will debut on Spike TV next year.
Odd News // 7 years ago
The almanac
UPI Almanac for Tuesday, Nov. 26, 2013.
Science News // 7 years ago
Researchers: King Tut may have been killed in chariot crash
British researchers say King Tutankhamun, possibly the most famous of the pharaohs of ancient Egypt, died in a chariot crash.

Tutankhamun (alternately spelled with Tutenkh-, -amen, -amon), Egyptian twt-ˤnḫ-ı͗mn, approx. ; 1341 BC – 1323 BC) was an Egyptian pharaoh of the 18th dynasty (ruled c.1333 BC – 1323 BC in the conventional chronology), during the period of Egyptian history known as the New Kingdom. His original name, Tutankhaten, means "Living Image of Aten", while Tutankhamun means "Living Image of Amun". In hieroglyphs the name Tutankhamun was typically written Amen-tut-ankh, because of a scribal custom that placed a divine name at the beginning of a phrase to show appropriate reverence. He is possibly also the Nibhurrereya of the Amarna letters. He was likely the 18th dynasty king 'Rathotis' who, according to Manetho, an ancient historian, had reigned for nine years — a figure which conforms with Flavius Josephus's version of Manetho's Epitome.

The 1922 discovery by Howard Carter and George Herbert, 5th Earl of Carnarvon of Tutankhamun's nearly intact tomb received worldwide press coverage. It sparked a renewed public interest in ancient Egypt, for which Tutankhamun's burial mask remains the popular symbol. Exhibits of artifacts from his tomb have toured the world. In February 2010, the results of DNA tests confirmed that Tutankhamun's Y-chromosome belongs to the R1b haplogroup. R1b is the most common Y-chromosome haplogroup in Europe reaching its highest concentrations in Ireland, Scotland, western England and the European Atlantic seaboard, rippling through the rest of Europe. The tests tests also confirmed that he was the son of Akhenaten (mummy KV55) and his sister/wife (mummy KV35YL), whose name is unknown but whose remains are positively identified as "The Younger Lady" mummy found in KV35.

Tutankhamun was born in 1341 BC, the son of Akhenaten (formerly Amenhotep IV) and one of his sisters. As a prince he was known as Tutankhaten. He ascended to the throne in 1333 BC, at the age of nine, taking the reign name of Tutankhamun. His wet-nurse was a certain woman called Maia, known from her tomb at Saqqara.

FULL ARTICLE AT WIKIPEDIA.ORG
This article is licensed under the GNU Free Documentation License.
It uses material from the Wikipedia article "King Tutankhamun."