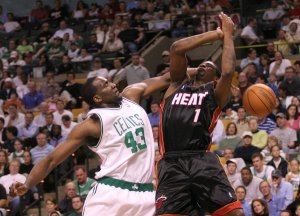 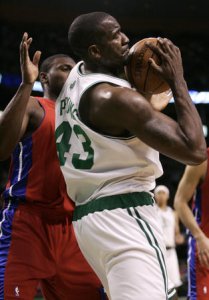 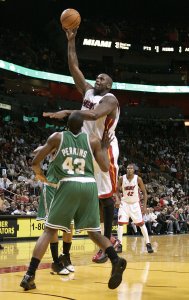 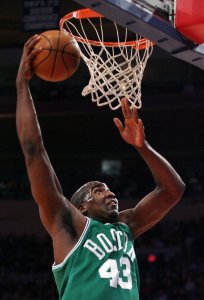 NBA // 2 years ago
Celtics host Cavs, look to keep rolling
BOSTON -- There was a time, and not too long ago, that Celtics fans would have looked at Boston's schedule and circled Friday night as one of those special dates.

NBA // 2 years ago
Drake gets into it with Kendrick Perkins during Cavs win
Drake and Kendrick Perkins got into a spat during the Cleveland Cavaliers' win against the Toronto Raptors in Game 1 of their 2018 NBA playoffs series.

NBA // 4 years ago
Russell Westbrook triple-double lifts Oklahoma City Thunder past New York Knicks
OKLAHOMA CITY -- Oklahoma City wasn't just carrying a simple two-game losing streak when it came into Wednesday night. Both losses to Golden State and Washington were blowouts in which they were never in contention to win.

Kendrick Perkins (born November 10, 1984 in Nederland, Texas) is an American professional basketball player who plays as a center for the Oklahoma City Thunder of the NBA.

During his time with the Boston Celtics, Perkins established himself as an important low-post defender who was capable of defending the league's top centers, despite not posting high scoring numbers.

Perkins graduated from Clifton J. Ozen High School in Beaumont, Texas in 2003 where he led Ozen High to four consecutive district championships and one state championship during his high school career. Averaging 27.5 points, 16.4 rebounds and 7.8 blocked shots a game as a Senior, he led Ozen to a 33–1 record, with the only loss being a 66–54 setback to Fort Worth Dunbar in the state 4A championship game. In 2003, Perkins was selected to the McDonald's All-American game for high-school players. He had originally committed to the University of Memphis, but opted instead to make the jump to the NBA straight out of high school.

FULL ARTICLE AT WIKIPEDIA.ORG
This article is licensed under the GNU Free Documentation License.
It uses material from the Wikipedia article "Kendrick Perkins."
Back to Article
/