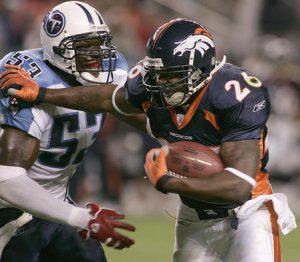 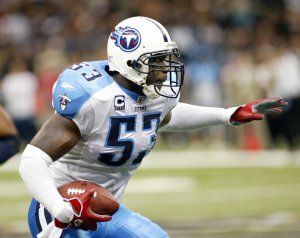 Keith J. Bulluck (born April 4, 1977 in Suffern, New York) is an American Football linebacker for the Tennessee Titans of the National Football League. He was drafted by the Titans 30th overall in the 2000 NFL Draft. He played college football at Syracuse.

Bulluck was a Pro Bowl selection in 2003.

At Clarkstown High School North in New City, New York, Bulluck was named first-team All County, first-team All-State, Blue-Chip All-American, and both Prep Football Report and Super Prep All-Northeast. He was also an All-County in basketball as a junior. On April 27, 2009, Bulluck's high school jersey, #1, was retired in a ceremony held at the high school.

FULL ARTICLE AT WIKIPEDIA.ORG
This article is licensed under the GNU Free Documentation License.
It uses material from the Wikipedia article "Keith Bulluck."
Back to Article
/